“With a dose of southern charm and a bad boy you won’t want to forget, A Cutthroat Business has enough wit and sexual chemistry to rival Janet Evanovich.”  -Tasha Alexander, New York Times bestselling author

The hilarious dialogue and the tension between Savannah and Rafe will delight fans of chick-lit mysteries and romantic suspense.” -Jo Ann Vicarel, Library Journal 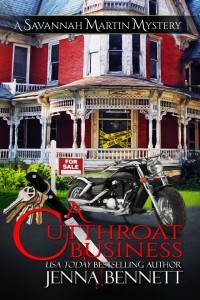 Everyone has warned new-minted realtor Savannah Martin that real estate is a cutthroat business. But Savannah doesn’t think she’s supposed to take the warning literally… until an early morning phone call sends her to an empty house on the ‘bad’ side of town, where she finds herself standing over the butchered body of a competitor, face to face with the boy her mother always warned her about.

Now Savannah must figure out who killed real estate queen Brenda Puckett, make a success of her new career, and avoid getting killed—or kissed—by Rafe, all before the money in her savings account runs out and she has to go back to selling make-up at the mall.