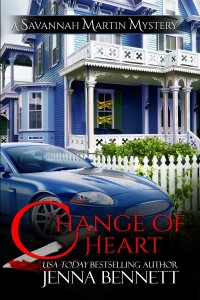 It’s late February, just two months after Savannah Martin and Rafael Collier finally worked things out between them, and Rafe is already sneaking out of bed in the wee hours.

Catching fellow realtor Tim Briggs rinsing blood from his hands in the office sink makes for a welcome distraction, and when Tim disappears just as one of his clients is found dead in a nearby park, Savannah throws herself into the investigation with abandon.

But even the murder mystery taking place right under her nose can’t completely distract her from worrying about personal problems. Has Rafe changed his mind about their relationship, or is something else going on? And what are the chances of Savannah coming out of this latest debacle with her life – and her heart – intact?

It was Rafe’s fault. If he hadn’t snuck out of bed before six, going God knows where, I wouldn’t have been in the office at the ungodly early hour of seven, and I wouldn’t have seen Tim washing blood from his hands in the bathroom sink.

It was a Saturday morning in late February, just about two months after Rafe had crashed my mother’s Christmas Eve shindig at the Martin Mansion in Sweetwater to tell me that it was Christmas, when all good girls got what they wanted, and that if I wanted him, I could have him.

He didn’t have to tell me twice.

We’d only rarely been out of bed since, let alone out of each other’s sight, or at least it felt that way. Rafe was out of work, basically, so he could spend every waking moment with me. The undercover job he’d worked for the past ten years—the one the Tennessee Bureau of Investigations had sprung him from prison to do at twenty—had finally come to a close. He had, almost singlehandedly, brought the biggest SATG—South American Theft Gang—in the Southeast to a screeching halt, and had blown his cover sky high in the process. Once the holidays were over and I’d gone back to work, he’d helped me with my real estate business when I needed him, and the rest of the time he’d spent working on his grandmother’s house on Potsdam Street in East Nashville, painting and scrubbing, getting it ready to list and sell.

I wished I could believe that’s where he was, getting an early start on the weekend’s labor, but it wasn’t. I’d driven past, taking a big, long detour through the Potsdam area, and there’d been no sign of the Harley outside the big brick Victorian, and no sign of life inside.

I pulled into the circular driveway anyway, and crunched my way up to the front steps. I even parked the Volvo and got out, traipsing across the gravel to climb the stairs to the porch to press my nose against the wavy glass in the heavy carved front door. There was nothing to see, and the door didn’t yield to my touch. I got back in the car again, and sat for a minute, torn between anger and concern.

If he wasn’t here, where was he? Where had he gone so early, and without telling me?

Maybe I should have followed him as soon as I opened my eyes and saw him sneak out. However, he’s much better at sneaking around than I am, a result of those ten years spent undercover. He’s caught me before, and the result was unpretty and embarrassing. And I still had a few shreds of self-preservation and dignity left. If he didn’t want me to know where he was, I wasn’t about to run after him. There are limits to how desperate I wanted to seem. And besides, I wanted him to think I trusted him, even if I, in my heart of hearts, worried what he might be doing that he didn’t want me to know about.

I thought about going back to the apartment to wait, about just staying there until he came home, whenever that was, to see what he had to say for himself. But if he took a long time, I’d be climbing the walls by the time he got there, and anyway, I didn’t want to make him think I didn’t have anything better to do. After two months of togetherness, I still wasn’t so sure of him that I wanted to take any chances.

So I drove to the office instead. I often do floor duty on Saturday mornings anyway. It was how I hooked up with Rafe in the first place. He’d called the office one Saturday morning in August, to tell me that our queen bee, real estate maven Brenda Puckett, had stood him up for an appointment—at the house on Potsdam Street, as it happened—and when I went out to meet him, we’d found Brenda dead in the library, with her throat cut from ear to ear.

It’s a long story. I’d been a bit leery after that of doing Saturday morning floor duty, but I didn’t have so many clients yet that I could afford to give up any opportunities, so I toughed it out most weekends. It’s usually a bit later than 6:55 that I pull into the parking lot, but I could just as well sit in the office as I could at home, I figured, and with luck, there might be something there that would distract me. Like work. Or a phone call.

Or Tim, bent over the sink in the bathroom, his face as pale as death while bright red-tinted water swirled down the drain and away.

I saw him as soon as I came through the back door. The bathroom is back there, off the hallway, and he hadn’t bothered to close the door. I guess he didn’t expect anyone to show up so early. And the sound of the back door opening must have been lost in the gurgling of the water going down the drain, because when I appeared in the doorway behind him, and he realized I was there, his whole body stiffened in surprise. The eyes that met mine in the mirror were wide: bloodshot and terrified.

“I’m sorry,” I said automatically, “I didn’t mean to startle you.”

And that’s when I noticed the red water sluicing down the drain.

I noticed a few other things too. He looked a bit less than his best, dressed in a faded long-sleeved T-shirt with the sleeves pushed halfway up his forearms, and a pair of seen-better-days jeans, with his hair in disarray and the aforementioned bloodshot, dark-rimmed eyes.

On someone else, it might not have been a big deal. But Tim is very particular about his looks. He’s gay, he’d gorgeous, and he has an image to uphold. I’ve never seen him look anything less than perfect: absolutely polished and put together. My mother would adore Tim; apart from the gay thing, that is.

But this morning he looked like he’d lived through the night from hell, and had woken up with a hangover.

The water was running clear now, and Tim turned it off. “I had a nosebleed.”

So it was blood.

Not that I’d been in much doubt, really. I’ve seen a lot more of it than someone like me—a gently bred Southern Belle—should have to.

It was fairly obvious he wasn’t thinking straight, to use a nicer expression than flat out lying. Another clue that something was wrong. Tim is usually pretty cunning, and doesn’t miss much.

“Something going on?” I asked.