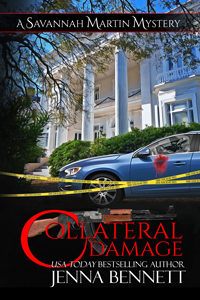 A white supremacy hate group is spreading its tendrils through the bucolic hills of Middle Tennessee, holding target practice in Laurel Hill wildlife area and stockpiling weapons in preparation for a race war.

It’s up to Savannah’s husband Rafe to find and eliminate them… with a little help from Columbia chief of police Tamara Grimaldi, the joint sheriffs of Lawrence, Lewis, Giles, and Maury counties, and an undercover agent from the Tennessee Bureau of Investigation – an undercover agent Rafe trained, and one he wants to keep alive.

But it isn’t Clayton in the cross-hairs when the members of the group discover they’re under investigation. It’s Rafe who goes down from a bullet to the chest, and Savannah who must sideline her worry to lend a hand in taking down the people responsible, before they can put their evil plans into action and affect damage that far supersedes the shooting of one man.

The bullet that hit Rafe came out of nowhere. One second everything was calm and copacetic—he turned to me and said, “I’ll get the baby,” before pushing his car door open—and the next, the world exploded, and he hit the side of the car and slid down, leaving a smear of blood on the window.

I screamed. Carrie started crying, and from inside the house, I could hear Pearl the pitbull go crazy.

I would like to make you believe that my subsequent actions were calm and rational. I’d like to, but the truth is, they weren’t. I was a gibbering mess, and it’s a minor miracle that I was able to function at all, let alone do anything useful.

Nonetheless, the tiny part of my brain that was operating on a level more advanced than, “Ohmigod, my husband’s been shot!” did manage to string some elemental cautions together.

If you get out of the car, you might get shot too.

If you get shot too, the baby will be alone, and no one might show up here until tomorrow.

Call for help before you do anything else. That way, if something happens to you, at least someone will come and find Carrie.

My nose was running and my eyes were leaking, but I knew the voice was right. And although every other cell in my body was screaming to go see how badly Rafe was hurt, somehow I managed to stay where I was and get the phone out of my purse. My fingers were shaking too much to hit the buttons for 911, so I had to ask Siri to dial the number for me.

It rang once, twice, and then— “911,” the voice on the other end of the line said calmly, “what’s your emergency?”

“I need an ambulance.” My breath was hitching enough that it was hard to get the words out. “Someone shot my husband.” I rattled off the address to the Martin mansion in Sweetwater, Tennessee. I’d grown up here, so thankfully the digits were hardwired into my brain, otherwise I’m not sure I’d have been able to call them up. “He works for the Columbia PD. Notify Chief Grimaldi. And Sheriff Satterfield. And hurry.”

I dropped the phone in the console, in the middle of the operator’s exhortation that I stay on the line with her. I wished I could, I wished I didn’t have to leave the safety of the car, but Rafe was hurt, and if he died out there, alone, while I sat inside the car waiting for the ambulance to show up, I’d never forgive myself.

So I slid my door open—and I had the sense to reach up and turn off the dome light before I did it, so I wouldn’t be outlined like a silhouette in a shooting gallery. And then I slipped out on the gravel and dropped to my knees, and, ignoring the pain as the small stones dug into my skin, started crawling around the car to see what—if anything—I could do for Rafe.