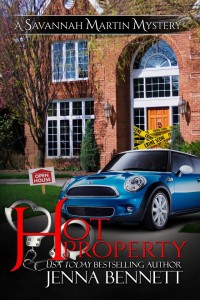 When Savannah’s fellow Realtor and friend Lila Vaughn is robbed during an open house, Savannah rushes to the rescue with tea and sympathy, or at least a really good lunch and a shoulder to cry on. However, Lila seems more peeved than distraught, and her main gripe is that the sexy robber who tied her to a kitchen chair—for her own good—didn’t follow her suggestion to tie her to the bed instead.

Lila’s description of the man fits Savannah’s old school-mate Rafael Collier to a T. Rafe has recently turned up in Savannah’s life again, and he isn’t above doing a little breaking and entering. Metro Nashville Homicide Detective Tamara Grimaldi is of the same opinion, and when Lila turns up dead, tied to her bed and strangled, Rafe becomes a suspect.

Now Savannah must get busy finding the real murderer before Detective Grimaldi can arrest the wrong man.

The first open house robbery took place on the second Sunday in August, just at the time I was busy apprehending a murderer.

Before I go any further, I guess I should make it clear that I’m not actually in the business of law enforcement. Walker Lamont was the first, and I sincerely hope the last, murderer I’ll encounter.

My name is Savannah Martin, and what I am, is a Realtor. Walker was my boss. Up until the moment I happened to be standing next to him when he came face to face with someone who could put him in the wrong place at the wrong time, we’d had a very good relationship, and I’m sure he meant it sincerely when he apologized for having to kill me.

“Does that sound OK, Savannah?” Tim’s voice said. I nodded vaguely. “I’ll put you down for that, then. Thank you.”

“No problem.” I had no idea what I’d just agreed to do, but I wasn’t willing to admit I hadn’t been paying attention by asking him to repeat it. I’d figure it out later.

Tim giggled. “If you’re worried, maybe you should ask Mr. Collier to keep you company. He looks like he’d be able to handle any number of robbers.”

Rafe would be more likely to be aiding and abetting them, but I didn’t say so. “I’ll keep the suggestion in mind,” I said instead, cooly.

“Do that, darling. And if you don’t, maybe I’ll ask him to guard my body instead.” Tim tittered.

I rolled my eyes. “Don’t be surprised if you find yourself tied to a chair, in that case.”

“Darling!” Tim bleated, seemingly overcome with emotion. He fanned himself with a limp hand as the rest of the room laughed. I blushed.