The sins of the past are coming due, and someone has to pay… 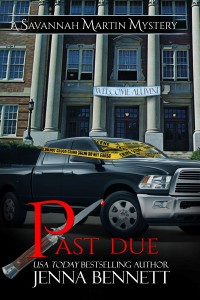 Savannah Martin’s high school reunion was supposed to be a fun weekend of catching up with old friends and parading her boyfriend—Sweetwater bad boy Rafael Collier—in front of everyone who used to sneer at him back in the day. Not even her daily battle with morning sickness can douse Savannah’s anticipation.

But when Rafe won’t come to Sweetwater, Savannah has to face her old schoolmates without his support. And her best friend Charlotte isn’t as happy for Savannah’s new relationship as Savannah had hoped. And when a dead body turns up in the Colliers’ old mobile home in the Bog, Savannah is thankful to be on her own. The sheriff is always looking for a reason to shove Rafe back behind bars, and a fresh homicide is just the excuse he needs.

But when another murder takes place at the reunion, even the threat of jail can’t keep Rafe away. Soon old classmates are dropping like bowling pins, and Rafe and Savannah are scrambling to catch up with a killer hell bent on making sure old enemies pay for old sins… all while trying to stay one step ahead of Sheriff Satterfield and the Columbia PD.

If someone had told me that at my ten year high school reunion I’d be married, divorced, and pregnant out of wedlock while I lived in sin with my mother’s worst nightmare, I would have laughed.

It just goes to show how wrong you can be.

My name is Savannah Martin, and ten years ago, I attended Columbia High School in Maury County, Tennessee, an hour or so south of Nashville.

At eighteen, I had my whole life planned out. After high school, I’d be attending finishing school in Charleston before my debut at the Christmas Cotillion in Savannah, my mother’s home town. (Since I was named for it, I was profoundly grateful she wasn’t born in Hephzibah or Tallulah Falls.) Once that was accomplished, I’d go on to study law at Vanderbilt University in Nashville, and eventually join the family law firm, Martin & McCall, on the town square in Sweetwater.

I didn’t plan to drop out a year before graduation to marry Bradley Ferguson, although Bradley—or someone like him—was part of the plan, too. He was healthy, wealthy, and white, a Southern gentleman from Natchez, Mississippi, who could trace his antecedents back to the War for Southern Independence and beyond. He was everything my mother wanted for me, and everything I’d been brought up to believe I should want for myself.

Pardon me while I laugh. Not so politely.

By the time my ten year reunion rolled around, Bradley was history. Ancient and unlamented history. I had divorced him three years before. He was kicking his heels in prison, as a matter of fact, waiting to go on trial for conspiracy to commit murder, while his current wife, the one he’d dumped me for after not quite two years of marriage, was dealing with a newborn.

I considered myself lucky to have escaped.

I considered myself beyond lucky to be pregnant and living in sin with the boy my mother, along with every other mother in Sweetwater, had warned their daughters about.

Yes, Rafe was from Sweetwater, too. But I had made the trek home for the reunion by myself. He’s three years older than me, so his own reunion had come and gone a few years ago, something he’d made sure to point out to me. Several times. Something he hadn’t pointed out, but which I already knew, was that he never goes back to Sweetwater unless he has to. Given the bad memories he has of the place, I don’t see any need to push him, either.

So I was alone when I walked into the Wayside Inn the evening before the big day, to have dinner with my best friend Charlotte, in from North Carolina for the occasion.

Charlotte and I had been inseparable through school. For a while, she’d even dated my brother Dix. But by now it was a few years since I’d seen her. She’d been there for my wedding, but not my divorce, and she didn’t know about Rafe. With Charlotte happily married with a couple of kids, and me a marital failure, we hadn’t had all that much in common over the past couple of years, and besides, Rafe’s and my relationship wasn’t something I had wanted to share by email.

The Wayside Inn is the most upscale restaurant in Sweetwater, and was, once upon a time, an actual roadside inn on the way from Columbia to Pulaski. It’s old and dark and full of atmosphere, and the chef was trained in France, so the food is excellent.

So is the service. When I walked in, the maitre d’ recognized me immediately. “Good evening, Miss Martin.”

So did someone else. A woman sitting on a chair inside the door looked up. “Savannah?”

It wasn’t Charlotte. In fact, it took me a moment or two to recognize her. The face was vaguely familiar, but hard to place under the heavy makeup, and the jet-black hair was new. She was beyond thin, bordering on anorexic, her long legs twisted into a pretzel shape around the legs of the chair.

There’s an old saying—originally uttered by Wallis Simpson, I believe—that a woman can’t be too thin or too rich. Wallis had obviously never met Christina Foster.

She nodded. I waited for her to tell me it was something else now—a married name—but she didn’t, so I guess she was still Christina Foster.

I moved a couple of steps in her direction, leaving the maitre d’ to hover politely by the door to the dining room. “What are you doing here?”

Of course. Tina and Mary Kelly had been inseparable growing up, just like Charlotte and I. We had gone to school together from kindergarten through 12th grade, so I guess it could be said that I knew Tina well. At the moment, however, I couldn’t come up with anything to say to her. I felt very far removed from the girl I had been the last time I saw her, and besides, she looked so different from what I remembered that it threw me a little.

I glanced over my shoulder at the dining room. The maitre d’ nodded.

I turned back to Tina. “Would you like to join us?”

She hesitated. “I don’t want to intrude…”

“You wouldn’t be. I’m sure Charlotte would like to see you.” And having Tina there meant I could put off telling Charlotte about Rafe for a bit longer.

Not that I didn’t want my best friend to share my happiness. I just wasn’t sure how happy she’d be. Or how long it would take me to convince her I hadn’t lost my mind.

“At least until Mary Kelly gets here. There’s no sense in you sitting here alone when you can sit with us.”

Tina allowed herself to be convinced, and unfolded her long limbs from the chair.

She’d always been tall. I’m five eight, and she had me beat by an inch or maybe even two. Add in the heels and platform soles, and she towered over me. And the extreme skinniness of her body only added to the illusion. It was like walking next to a giraffe.

“Do you model?” I asked as we followed the maitre d’ toward the table in the back where Charlotte was waiting.

From the neck down, anyway. The face was a different matter. It was difficult to tell under the exaggerated makeup, but she looked older than twenty-eight, haggard and drawn, like the last ten years had been hard. And the posture wasn’t all it could have been, either. She had the height, but she stooped, like she were ashamed of it.

And then the maitre d’ stopped beside our table, and I forgot all about Tina as Charlotte got to her feet with a squeal. “Savannah!”

I squealed back, and gave her a real hug, not the lean-in-and-kiss-air that’s popular among Southern Belles.

My old friend looked the same, plus a few years and a few pounds. None of us keep our girlish figure forever, especially after a couple of kids. She had the same soft, brown hair, the same oval face, the same bow-shaped mouth and turned-up nose. With a bit more fullness in the chest, perhaps. I wasn’t sure whether to accredit that to nursing two kids, or to having married a cosmetic surgeon.

The smile was genuine, anyway, when she stepped back to look at me. “You look great!”

Oh, sure. I certainly didn’t look eighteen anymore. And I was battling morning sickness these days. Although I hoped to God I looked better than Tina.

And that reminded me. “Look who I ran into in the lobby. You remember Tina Foster.”

“Of course,” Charlotte said. She looked like she was contemplating hugging Tina, too, but Tina’s body language must have dissuaded her. She put her hands behind her back instead. “Nice to see you.”

“She’s waiting for Mary Kelly,” I explained. “I thought they might want to join us for dinner.”

Tina didn’t say anything. Charlotte didn’t either, and I added, into the slightly awkward silence, “Or at least that Tina could sit with us until Mary Kelly shows up.”

There was. She had snagged us a four-top table, so there were two empty chairs. Charlotte had already claimed hers. I took the one opposite, and left Tina to fit her long legs into the corner.