Two years after the release of Ditching David – or maybe it’s three? – here, finally, is Gina’s second adventure, and her first as a licensed PI. The delicious detective Jaime Mendoza is back, of course, as is Rachel and Zachary, and a new addition to the firm: a Boston terrier named Edwina. 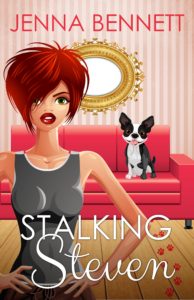 University professor Steven is spending significant time with a beautiful, blond Russian young enough to be his daughter, which sets all of Gina’s antennae quivering. But what is supposed to be a simple case of philandering soon turns sinister when the nosy neighbor of the young Russian girl is murdered, and Steven and the young woman are nowhere to be found.

Add in a ransom note for Steven’s return, a bloody attack on Gina’s associate Zachary when he asks questions about the Russian girl, and the newest addition to the firm—a Boston Terrier that used to belong to the murder victim—and the newly licensed PI has her hands full.