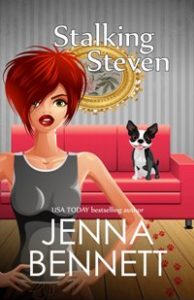 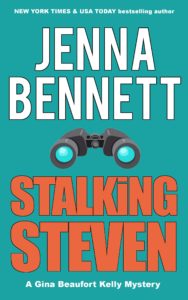 I was minding my own business, sitting there in my incognito black SUV, innocently parked on a quiet street in what’s called ‘an established neighborhood,’ when a sudden rap on the window made me jump in my seat. My heart leaped up onto my tongue and kept banging there, and it took some effort to get it back down where it belonged.

When I turned in the direction of the rapper, I was faced with a badge and an ID-card, held against the window.

The badge was shiny, and had Metropolitan Nashville Police Department stamped on it.

The ID card next to it was almost equally shiny. The picture showed a man in his early thirties, with black hair and the frozen expression people have in official photos. Although he looked considerably less handsome in the picture than I knew him to be in life, I didn’t need to check the name on the card to recognize him.

I powered down my window, as the badge and ID disappeared into the pocket of a very nice suit. Armani. “Detective,” I said politely. “Long time, no see.”

“Three weeks,” Jaime Mendoza answered, putting an arm on the top of my car and leaning down to peer inside. “What are you doing, Mrs. Kelly?”

Eyes the color of melting chocolate took in the interior of my car. Empty back seat—cream colored leather—and a passenger seat with a manila folder, a notebook and pen, a digital camera, and a textbook. The name on the book was Private Investigating for Dummies.

I had known this was coming. Diana Morton—my divorce attorney and current client, and the reason I was sitting here on this quiet street in the middle of the afternoon—had warned me that Mendoza didn’t approve of PIs. Something about his ex-wife hiring one, and then marrying him.

The PI, not Mendoza.

I didn’t know all the details, and had resisted the temptation to use my newly-acquired skills to figure them out. But I’d been waiting for this. Diana had told me that Mendoza would be unhappy when he heard about my new career.

“No, Detective,” I told him. “I’m not kidding. I qualified for my license last week. I’m turning David’s office on Music Row into a PI firm. Fidelity Investigations.”

His mouth curved at that. “That’ll serve him right.”

I smiled back. “I think of it as poetic justice.”

David, who became my late husband just in time to avoid becoming my ex, had left me for a twenty-five-year-old Salma Hayek lookalike a few months ago, and had managed to get himself killed shortly thereafter. Mendoza had been the homicide detective in charge, which was how we met. I’d been the obvious suspect, and I’ll always be grateful to him for digging deeper instead of just slapping handcuffs on me.

“Rachel is helping me run the office,” I added, “David’s administrative assistant, remember? And Zachary is doing the computer searching and online marketing and such.”

“I thought he was waiting to apply to the police academy when he turns twenty-one,” Mendoza said.

I nodded. “He still wants to do that. But he figures working for a private investigator will look better on his resume than being the doorman at the Apex.”

Mendoza looked doubtful, and considering that the PI in question—me—had had her license for all of six days, maybe he had cause.

“We have our first case,” I added. “Diana hired me to stalk… I mean, follow her husband around.”

“She isn’t sure. That’s why she wants me to follow him. To find out.”

That got me a smile, complete with dimples and a corresponding surge of appreciation in my stomach. Mendoza is way too handsome for his own good—or at least too handsome for mine. He’s close to a decade younger than me, and even just lusting after him in the privacy of my own mind is questionable. Lusting at all, at forty, might be a no-no.

“A call came in to the 911 hotline,” he told me, “about a suspicious vehicle on this street.”

“Really?” I looked around. “I’ve been sitting here for more than an hour, and I haven’t seen anyone suspicious.”

Unless he was talking about Steven’s car, a nondescript brown sedan that was parked in a driveway a couple houses up from where I was parked. But it was doing absolutely nothing suspicious that I could see. What Steven was doing inside the house might be another matter, of course, but I hadn’t yet dared to leave my own car to investigate. Not in broad daylight.

My eyes widened. “Someone reported me?”

He nodded, his mouth twitching. I deduced he was working hard to suppress a grin. “Mrs. Grimshaw, up there.”

He nodded at the house I was parked outside, a low-slung brick ranch with a big picture window in the front. If I squinted, I could just make out a human figure through the glass.

Mendoza nodded. “She called 911 and said a suspicious vehicle had been parked outside her house for more than an hour. Big and black, she said. And I think she may have mentioned the X-files.”

“Probably not,” Mendoza admitted. “But she did call 911 and report suspicious activity.”

He took a step back to run his gaze along the side of my new-to-me Lexus. “New car?”

“The convertible was too conspicuous.”

I shrugged. The SUV was all right. I couldn’t drive around with the wind blowing through my hair—not unless I rolled down all the windows and created a sort of whirlwind effect inside the car—but it was a small price to pay. “So what are you doing here? The neighbor called, yes. But you’re a homicide detective. Or did they demote you after you got yourself knocked out and stuck in the vault?”

“No,” Mendoza said, sounding annoyed, “they didn’t demote me. I solved my case, and arrested a murderer and an embezzler. My lieutenant, and the lieutenant in the white collar crime division, are both very happy with me.”

“Good for you. So what are you doing here? No one’s dead.”

“Mrs. Grimshaw used her binoculars to get your license plate number,” Mendoza said. “When they put your name into the database, they saw you were flagged as a person of interest in one of my cases. So they tagged me.”

“And you volunteered to come out and check on what I was doing?”

“No dead bodies taking up your time today?”

“Not so far.” Although his tone intimated that I was in danger of changing that. I deduced I was annoying the detective.

“I’m sorry,” I said. “There’s nothing going on here. Certainly nothing Mrs. Grimshaw has to worry about. Steven Morton is in that house up there, where the brown sedan is parked. That’s his car. As soon as he leaves, I’ll be leaving, too.”

“It would be better if you left now,” Mendoza told me, “but you’re in a public place, and not threatening anyone with your presence, so there isn’t much I can do about it if you won’t.”

No, there wasn’t. Although if he really insisted, I’d do as he said. It’s always a good idea to stay on friendly terms with the police.

Of course, I’d just park on the next street and wait for Steven to drive by. And then I’d follow Steven home. Or back to the university. Or wherever he was going next.

“Let me give you a piece of advice, though,” Mendoza added.

“Next time you’re planning to stake out a house for any length of time, give the police a call first. Not 911, just the regular number. Introduce yourself, tell them who you are, give them your license number, and explain what you’re doing. That way, if someone like Mrs. Grimshaw calls, they won’t have to send anyone out to check.”

“You didn’t have to come out here,” I felt compelled to point out. “You knew it was me. And you must have known I wasn’t doing anything illegal.”

“You had a restraining order filed against you last month,” Mendoza reminded me.

“She was my husband’s mistress! I had the right to know what she looked like!”

“You didn’t have the right to park outside her apartment for hours at a time and stare at her through your binoculars.”

“I didn’t!” And he knew that, because I’d told him so before. I inhaled a deep breath through my nose. “You have my phone number. Why didn’t you just call?”

Was it possible—be still, my heart!—that he had taken the opportunity to drive out to see me?

“I have to go tell Mrs. Grimshaw that she’s safe,” Mendoza said. And added, as I deflated, “Plus, I wanted to make sure you weren’t stalking someone else.”

He was joking. At least I think he was. Hoped he was.

“I’m stalking Steven,” I said. “Legally. His wife hired me. And I have a license to stalk.”

“Good for you,” Mendoza said. “I hope you and your license will be very happy together.”

He straightened, and glanced away from me. “I should go see Mrs. Grimshaw now.”

“Tell her I’m nice. And harmless.”

Click to go to the next book in the series

Click to go back to the previous book in the series