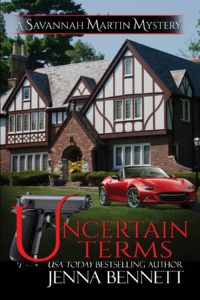 Savannah’s husband, TBI agent Rafe Collier, is back in disguise and undercover, getting into the middle of a gang war. And since he wants to keep his pregnant wife out of harm’s way, Savannah agrees to spend a couple of days under her mother’s roof in her quaint and quiet hometown of Sweetwater, Tennessee.

But out of harm’s way doesn’t necessarily mean out of trouble.

When her brother’s receptionist asks Savannah’s help in looking for her birth parents, Savannah is happy for the distraction, even when the search takes them to places she’d rather not go again. From Doctor Denise Seaver and the Tennessee Women’s Prison, to St. Jerome’s Hospital and then back to Sweetwater again, the hunt is on.

But when the final denouement reveals lifelong deception and betrayal much too close to home, Savannah wonders whether knowing the truth really is better than blissful ignorance.

My husband showed up to my mother’s birthday party with dreadlocks halfway down his back, a big, fat gold hoop in his ear, gold chains around his neck, and two gold teeth that hadn’t been part of his smile when I said goodbye to him the day before.

I had made the hour-and-a-little-more drive from Nashville to Sweetwater the previous afternoon, to have dinner with Mother and to be there in the morning to admit the caterers so she could go to the spa and get prettified for her party later on.

Rafe, meanwhile, had stayed in Nashville an extra day, and—it turned out—had taken the opportunity to get in character for his latest undercover mission.

My new-minted husband—we’d been married just a bit less than two months—had spent ten years undercover for the Tennessee Bureau of Investigations before we met. Or before we met again, I should say, since Rafe also grew up in Sweetwater, and we’d gone to high school together for a year before he graduated, went to prison, and then disappeared into the TBI’s undercover program.

It’s a long story. Suffice it to say that we’d met again a year ago, just before my mother’s birthday last August, and he’d retired from undercover work the previous Christmas, after his cover was blown sky high. The only reason he was going back into it now, in a very limited capacity, was because one of the rookies he was responsible for training had gotten himself recruited by a street gang, and Rafe felt responsible enough for the young man to want to back him up as he set about infiltrating.

And since his ten years undercover had been spent trying to root out the biggest SATG—South American Theft Gang—in the Southeast, it was unlikely that anyone in the Crips or Bloods—or whichever street gang Jamal was affiliated with—would know Rafe from Adam. They’d traveled in very different circles up until now.

So I had driven to Sweetwater by myself yesterday, and Rafe had stayed behind in Nashville to work. He was supposed to come down for the birthday party, and as people started arriving, I kept my ears peeled for the sound of the big Harley-Davidson he rides. When I heard it rumble up to the front steps of my ancestral home, the Martin Mansion, I excused myself and went out to greet him.

Only to stop, with my jaw unbecomingly slack, on the top step. “What happened to you?”

He arched a brow. That ability hadn’t changed, anyway.

“It’s my mother’s birthday,” I added. “And you look like some sort of combination between Captain Jack Sparrow and Bob Marley.”

That got me a grin, and a flash of gold.

I moved a step closer and squinted. “Oh, my God! What did they do to your teeth?”

He shook his head. “Sorry, darlin’. The dentist’s gonna have to do that. It’s stuck till then. But it’s just for a couple days. Until we get this business with Jamal sorted.”

Easy for him to say.

“It’s my mother’s birthday!” I said. Or perhaps ‘wailed’ would be a better word. “Everyone’s here. My brother and sister. The sheriff.” My mother’s boyfriend. “Todd.” The sheriff’s son, and the man my mother had intended for me to marry before I chose Rafe instead. The man who had intended to marry me, before I said no. “Half the town. And you look like the worst stereotype of what they’ve accused you of being all these years!”

He didn’t say anything for a moment, just stood there at the bottom of the steps next to the Harley and looked up at me.

“This is terrible!” I insisted.

His voice had all the calmness mine lacked. In fact, it was devoid of emotion. So was his face.

But I couldn’t finish the sentence, because—yes—I had meant exactly what I said.

“Don’t wanna walk in there with me looking like this.”

Right. And yet not exactly right. “I love you,” I said. “I don’t care what you look like. Not for my own sake. If you want to keep the teeth and the dreadlocks after this is over, you can.”

Although I hoped he wouldn’t. I might not stop loving him if he sported dreads and two gold teeth, but I wasn’t particularly turned on by the new look, either. “It’s just that this is Sweetwater. These are the people who didn’t have a good word to say about you your whole life. Mother has just started liking you. I don’t want that to change.”

“Here’s the thing,” Rafe told me. “There ain’t much I can do about it. The gold veneers are stuck until the dentist takes’em off again. The hair is stuck until the hair dresser cuts it off. I can take out the earring and pull up my pants—”

I think I may have neglected to mention that he was wearing baggy jeans of the sort that were belted under his butt, exposing a pair of plaid boxers, with the crotch hanging somewhere in the vicinity of his knees. He looked like his legs were a foot-and-a-half long. I had no idea how he’d even managed to straddle the bike on the way here.

“That would help,” I said. “You couldn’t have waited until tomorrow to do this?”

“Wendell didn’t know it was your mama’s birthday when he scheduled it, darlin’.”

Wendell is Rafe’s superior in the TBI. While Rafe was undercover, Wendell was his handler. And while I have all the respect in the world for Wendell, at the moment, I wanted to kill him.

“Couldn’t you have told him about the party? And put the makeover off for a day?”

“Not really,” Rafe said. “This stuff takes time. I bet I spent more time getting worked on today than your mama did.”

My mother had spent several hours at the spa, having her hair tinted and her face polished. And yet, given the transformation, it wouldn’t surprise me if Rafe had spent more.

At least now I understood why he hadn’t buzzed his hair the way he usually does for the past couple of weeks. It was so the extensions could have something to hang onto.

“Gives me a headache.”

I didn’t doubt it. He was used to being almost bald, his hair so short it felt like fuzz against my palms. This had to be close to ten pounds of dreadlocks weighing down his head.

I hated to think what would happen when they got wet. He might fall on his butt from the weight.

And having a constant headache didn’t bode well for our sex life. I was struggling with baby hormones—another way of saying I was frisky a lot of the time, now that the morning sickness had passed—and so far, Rafe had been more than happy to satisfy my needs, whenever and wherever I wanted. But if he was going to be coming home with headaches every night, I might be in for a lonely few days or weeks.

A car turned into the driveway, and we kept quiet while we watched it come to a stop behind all the others. Mother’s lived in Sweetwater most of her adult life—my father was born here—and she has a fair few friends and acquaintances. There were a lot of cars.

This last one, a Honda, went silent, and after a moment, the driver’s side door opened and a woman came out. Tall and dark-haired, a few years older than Rafe—around thirty-four or -five, at a guess—in a nice, but not flashy, black dress. Darcy, my brother Dix’s and brother-in-law Jonathan’s paralegal and Jill of all trades down at the law office my great-grandfather started on the square in Sweetwater back when the country was young.

We watched as she came closer. The dismay crossing her face when she saw Rafe was unmistakable. “Nobody told me this was supposed to be a costume party.”

I giggled. Rafe rolled his eyes.

“It isn’t,” I said. “You look lovely, Darcy. And very appropriate.”

“OK.” Although she didn’t sound sure. “What’s with the… um… ghetto outfit?” She looked him up and down.

“He works for the TBI,” I explained. “The Tennessee Bureau of Investigations. Organized crime. This week, he’s dealing with street gangs.”

“Oh.” Darcy hesitated. “Has your mother seen him?”

I shook my head.

He brushed past us both and headed up the stairs. I scrambled after, and Darcy brought up the rear, obviously determined not to miss anything.