Just like her personal life, Savannah Martin’s real estate career has been an uphill bat 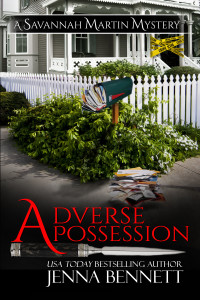 tle. As far as Savannah is concerned, her personal zenith was getting Aislynn Turner and Kylie Mitchell into their dream home, a Victorian cottage in the hip and happening historic district of East Nashville, last January.

That was six months ago, and now the dream has turned sour. Someone is sending Aislynn and Kylie threatening letters, warning them to get out while they can. Aislynn is terrified and Kylie is ready to cut her losses.

But finding a poison pen is only the beginning. When Kylie is attacked and the previous owner of the house is killed, the hunt is on for a murderer, and Savannah is determined to get to the bottom of what’s going on before Aislynn and Kylie have to give up their dream home, and maybe each other, in the process.

“I’m sorry, Savannah,” Kylie said. “Aislynn didn’t even want me to contact you, she’s so embarrassed. But you were so nice when we bought the place…”

“It’s OK.” I swallowed the lump in my throat. It was the ‘didn’t even want me to contact you’ that had caused it. “I understand. People sometimes sell their houses.” Even houses they had just bought. And they didn’t always—didn’t usually—use me to do it. Even if I had helped them buy the house in the first place. “It’s just… you’ve only owned it five or six months. And you seemed so excited when you bought the place…”

The house they’d bought back in December, a lovely Victorian cottage, sat in the middle of historic East Nashville. It was a very nice neighborhood, full of old, renovated houses, hip people, popular restaurants, and health food stores catering to dogs and people. It was hard to imagine that they weren’t enjoying it, especially considering how excited they’d been just last winter.

“We love the location,” Kylie said. “We couldn’t ask for a better place to live.”

“Then…” I glanced over my shoulder and lowered my voice, “the price?”

I was sitting in my office, a converted coat closet off the lobby at LB&A, a real estate company in the heart of historic East Nashville. The only person in sight was Brittany, the receptionist, and she had her nose buried in the most recent issue of Cosmopolitan. She couldn’t care less what I was saying. But it’s unladylike to inquire about someone’s finances, or lack thereof.

I hadn’t thought so. Renovated Victorians in East Nashville come at a premium, but Kylie worked in banking and made good money. Unless she’d suddenly lost her job, she shouldn’t have a problem paying the mortgage.

“I don’t understand,” I said. “If you like the house and the location, and the money isn’t an issue…”

Kylie sighed. “It’s the letters,” she told me.

Letters? “Isn’t the postman delivering your mail?” That was a simple problem to fix. All I’d have to do was talk to the post office that serviced their address, and straighten things out.

So they were getting mail they didn’t want. “You can opt out of getting junk mail, you know.”

“It isn’t junk mail,” Kylie said. “Or it is, sort of. I think we should just ignore it. But Aislynn is afraid. And I don’t want Aislynn to be afraid.”

I didn’t want Aislynn to be afraid, either. She was a sweet young woman, a waitress I had met last November, while trying to figure out what had happened to my late sister-in-law. Aislynn had fed Sheila her last meal, unbeknownst to either of them. Aislynn and her girlfriend Kylie had wanted to buy a house, and had asked me to help them. They had invited me over a couple of weeks after moving in, to eat dinner and see the place, and they had seemed thrilled to be where they were. It was disconcerting to learn, just a few months later, that something was wrong enough that they wanted to sell.

“What is she afraid of?”

“It’ll be easier if I show you,” Kylie said. “Are you free for dinner tonight?”

For a change, I was. “Rafe is taking some of the rookies out for surveillance and shadowing.”

My husband works for the TBI—the Tennessee Bureau of Investigation—training new recruits in undercover maneuvers, and once a month or so, they go out to sneak around after each other and the occasional unsuspecting civilian. It’s part of the training—how to follow someone, how to pick up a tail—but mostly I think they’re just out there having fun.

Anyway, Rafe wouldn’t be home until nine or ten tonight.

“We got the wedding invitation,” Kylie said. “Sorry we couldn’t make it.”

“It’s OK. I know it was last minute.” Rafe and I had intended to get married at the courthouse the first weekend in June, with just a handful of people in attendance. Instead, we’d ended up tying the knot a week later, at my childhood home in Sweetwater, Tennessee—the Martin Mansion—with almost everyone we knew in attendance, including half of our old hometown. But it had been short notice, so there were a few people who received Mother’s nicely calligraphied invitation who had been unable to make it.

“Can you stop by the house around five-thirty tonight?” Kylie asked. “I should be home by then. Aislynn is doing the cooking.”

I told her that would be fine, and I’d see them both then. Then I hung up, and leaned back in my chair to gnaw the lipstick off my bottom lip.

I’d had my real estate license for a little over a year. In that time, I had sold a few houses to a few people. Not as many as I should have. I kept getting sidetracked by dead bodies, and by people gunning for Rafe. But Aislynn and Kylie were one of my few success-stories, and I wanted them to be happy. If there was anything at all I could do to help figure out whatever was wrong, I’d do it.