Sixteen year old Jolene Brennan lives an idyllic existence in picturesque Abingdon, Virginia, in the Blue Ridge Mountains, with her history-obsessed parents and her one-year-older brother Jared, her best friend Kelli, and Jared’s friend Rufus, whom Jo has had a crush on for so long that she can’t remember when it started. 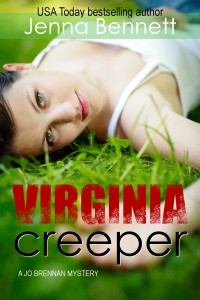 All that changes when Jared’s girlfriend Chelsea is murdered.

Everyone saw Chelsea leave with Jared after the AHS baseball game Saturday night, and the scratches on Jared’s face match the tissue under Chelsea’s fingernails. When word gets out that Chelsea was pregnant, Jared is charged with her murder.

With the police busy gathering evidence to prove their case, it’s up to Jo to prove Jared’s innocence, with a little help from Kelli and Rufus.

I knew it the first time I saw her walk down the corridor of Abingdon High School, turning the head of every boy (and a few of the girls) she passed on the way. Including the head of my brother Jared, who should have known better. Not to mention the head of his best friend Rufus, who definitely should have. Not that that stopped either of them.

Further acquaintance did not improve my first impression. Chelsea turned out to be shallow, manipulative, vain, and catty. And unfortunately for me, I got to know her quite well. Or as well as anyone in Abingdon, anyway. Jared, who is not usually a fool, even if he is my brother, seemed like he couldn’t see past her corn-silk hair and pierced navel and—let’s just say it—the fact that she put out, and he kept insisting that he loved her, and she loved him, and they were going to grow old together.

Still, royal bitch though she was, she didn’t deserve what happened to her. Nobody really deserves being beaten and strangled and left in the dirt like a blown tire, do they?

My name is Jolene Brennan. For obvious reasons, I go by Jo. Sometimes Jolie, although it’s really just Rufus who calls me that. And Jared, when he wants to see me squirm.

We live in a small town called Abingdon, just west of I-81 and almost as far south as Tennessee, at the beginning of the Virginia Creeper Trail.

That’s not what it sounds like, by the way. Virginia Creeper is a plant, one of those vines that strangles everything in its path, like Kudzu, and the Virginia Creeper Trail is a biking, running, riding and—when we have snow—cross-country skiing trail that runs along an abandoned railroad line from Abingdon to Whitetop, on the North Carolina state line. A 4-8-0 steam engine sits at the beginning of the trail, on Pecan Street in Abingdon. Supposedly, the trail got its nickname from those old locomotives, and the way they crept up the trail’s steep grades. All the creeping ivy in the area probably had something to do with it too.

In any case, the Creeper Trail has nothing to do with anything creepy, like people getting strangled. At least not until Chelsea Jacobson’s body was found at the head of the trail one Sunday morning in April.

It was a pair of bicyclists who found her, when they headed out for their weekly ride. Any other weekend, one of those bikers might have been me, since Jared had a habit of hitting the trail early sometimes, and of making me go with him. He’d have preferred Chelsea, I’m sure, but his new girlfriend wasn’t the outdoorsy type, and Rufus had been mostly absent since Jared started spending so much time with her. So Jared settled for bike-riding with his little sister instead. But this weekend he hadn’t suggested it. Instead of dragging me out of bed at dawn, Jared slept late. I still hadn’t seen him when the doorbell rang at a few minutes past ten.

Abingdon is as safe a place as any, but it was just the two of us in the house—and one of us was, as far as I could tell, dead asleep upstairs—so I made sure to peek out the window onto the porch before I opened the door. What I saw out there made my eyes widen and my hands fumble when I twisted the deadbolt and turned the knob.

Most everyone knows everyone else in Abingdon, at least those of us who have been around for a while. Matilda Thayer has been sheriff since before I was born, which is more than sixteen years now. She and my mom went to school together. At AHS, where Jared and I go now. Jared is seventeen, by the way, and Mattie Thayer’s been sheriff longer than Jared’s been alive, too. So the fact that she knows us and calls us by our first names doesn’t mean anything. It’s not like I’ve got a police record or anything.

She looked serious, and for a second I worried that something had happened to mom and dad; that she was coming to tell us we were orphans.

“Your brother here?” She glanced over my shoulder into the interior of the house.

“Jared?” It’s not like I have any other brothers, but I wasn’t thinking straight, what with the panic. “I think he’s upstairs.”

I hadn’t seen him, but the door to his room had been open when I went to bed last night, and now it was closed. I stepped aside, but the sheriff didn’t move off the welcome mat.

“How old is Jared now, Jo? Has he turned eighteen yet?”

I shook my head. My mouth was dry. “His birthday’s in November. Why?”

The sheriff didn’t explain. “Your folks not home?” she asked instead.

I breathed a sigh of relief. At least nothing was wrong with mom and dad, then. “They drove up to Williamsburg on Friday. For some kind of conference. Daughters of the Revolution or Colonial Virginia or something.”

Our parents are amateur historians, or hysterians if you prefer. All about preserving old Abingdon, preserving the Creeper Trail, preserving any little piece of the past they can. Since Abingdon’s the oldest town west of the Blue Ridge Mountains, there’s plenty to preserve around here.

“When are they coming back?” Mattie Thayer asked.

I shrugged. “Probably not until late. You know how it is. When they get with the other nuts, they forget the time.”

The sheriff nodded. She’s a bit of a history nut herself, although not as rabid as mom and dad. Still, she takes part in the living history reenactments during the Highland Festival, and does something for the Hysterical Society, as well. If she hadn’t been on duty this weekend, maybe she’d have made the 5-hour trek to Colonial Williamsburg, too.

But she was in uniform, with a night-stick and gun holster hanging from her belt, and here on our porch at barely 10 o’clock on a Sunday morning, when any God-fearing Southern Baptist ought to be in church. Something was going on, and it made me nervous. Why was Sheriff Thayer asking about Jared’s age? And why did she seem concerned that our parents weren’t here? We were old enough to take care of ourselves, and it wasn’t the first time the two of us had been home alone for the weekend. The sheriff had to know that.

Sheriff Thayer lifted a hand to stop me, but then she let it fall again. I waited a second, just to see if she’d tell me not to go, but when she didn’t, I excused myself and headed up the stairs to the second floor.