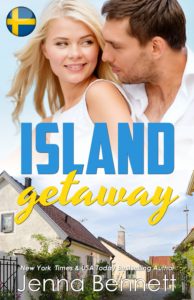 On the fabled Island of Roses and Ruins – medieval Gotland in the Baltic Sea – a shy librarian and a dashing FBI agent must work together to find a killer, a stolen silver treasure, and a missing bag of cremains.

What kind of daughter loses her father’s ashes, for God’s sake?

But—Annika reminded herself—it wasn’t a world where everything was right and good, was it? If it were, her father wouldn’t have been shot and killed for the money in his wallet, and she wouldn’t be here, halfway around the world, sans his cremains.

And the trip had started out so well, too.

She’d been early to the airport, of course. The flight left in the evening, and navigating New York City at rush hour, straight through Manhattan from Brooklyn to Newark, had been a daunting proposition. She’d set out five hours early, just to be sure she wasn’t late, and had gotten to LibertyAirport with three and a half hours to spare.

But the wait hadn’t been unpleasant. She’d walked around a bit and browsed in the duty-free stores. She hadn’t bought anything, but she’d noted a few things she thought she might want to buy, once she was on her way home instead of headed halfway around the world. She probably wouldn’t end up buying anything on her way home either, but thinking about it was nice.

After that, she’d bought herself dinner in one of the restaurants—she was on vacation, after all, and it was all right to eat alone in an airport. There, it didn’t mean she was the kind of girl who couldn’t get a date. Rather, it meant she was confident and sophisticated enough to travel on her own, without anyone else.

And when those activities had paled, she’d simply sat down in one of the seats by the gate to read, the carry-on bag with the ashes safely tucked behind her feet, where no one could get at it.

As a librarian, she should probably abhor eBooks—more than a few of her colleagues did—and as a librarian she definitely appreciated the sight and smell and feel of a “real” book in her hands, but for traveling, nothing could beat an eReader. She’d never run out of books again. And if she did, there were more just a click away.

For the trip, she’d downloaded everything she could find about Gotland—fiction, non-fiction, Frommers, what have you—and quite a bit about Sweden in general. Her Danish mother had made sure Annika, Anders and Astrid were grounded in the Danish language and Danish history and custom, but her father hadn’t seemed to care that his children didn’t speak Swedish or know much about his childhood home. They’d gone to visit family in Denmark every few years growing up, until they were old enough to want to stay home with their friends during school breaks, and then Anne had gone on her own. But Carl Holst—Calle Magnusson, Annika corrected herself, still amazed that she hadn’t ever known her father had spent most of his adult life living under a name that wasn’t properly his own—hadn’t ever brought his children to Sweden, not even when they’d been so close that it was just a hop, skip and a jump away, and hadn’t gone back himself, not in the more than thirty years since he’d left.

And she’d lost him.

So anyway, the trip had been uneventful up until that point. She’d spent the time in the airport reading, and when she needed a break, she’d watched the people moving through the terminal, wondering where they were going and what they were doing. Making up stories about them. That young woman, in the Indian clothing with the red dot between her brows and the resigned look on her face, dragging her feet… was she just tired, or was she reluctant; on her way to India to be married off to a cousin against her will? Just before the airplane doors closed and the flight took off, would her boyfriend push his way onboard, to tell her he couldn’t live without her and to convince her to elope with him? Would he succeed, or would shNew York Times bestselling author Jenna…e abide by her parents’ wishes? Would she find love, either way?

And the two backpackers, barely out of their teens, with heavy boots and bright smiles… were they off to explore Europe for a month, tramping through the Old World, gawking at museums and architectural gems? Or were they headed to Africa to plant crops and minister to the sick? Archaeology students, off to dig in Cornwall, or missionaries, going to preach to the heathens of darkest Borneo? Boyfriend and girlfriend? Siblings? Or just friends?

And what about the handsome businessman, the one with the black hair and dark suit, hunched over his tablet? Was he an engineer, going to save a bridge from collapse, or an accountant, going to save a business from bankruptcy? Or maybe a spy, going to save the world as she knew it? With those kinds of dashing good looks, he could be anything. She could totally imagine him in full James Bond mode, navigating his customized Lamborghini along the beach in Monte Carlo, top down, wind ruffling those dark curls. She could see him pull up outside a casino and get out of the car, smoothing a well-manicured hand over his hair and straightening his bowtie before tossing the keys to the valet and going inside to the glitz and glamour, his stride long and unhurried; his face bland, but his gaze ever vigilant, missing nothing—

Just then, he lifted his head and caught her eye, and Annika had found herself looking into a pair of brown eyes, as dark and melting as Godiva chocolate, surrounded by long sooty lashes. He held her glance for a few seconds, just long enough for her to turn beet red, before he smiled and went back to work. After that, Annika kept her attention on her own tablet and didn’t look at anyone else for too long.

For more information about Visby, Gotland, and the events and places mentioned in this book, feel free to visit the following websites: