What Kaylee Carter needs, is a friend with benefits. 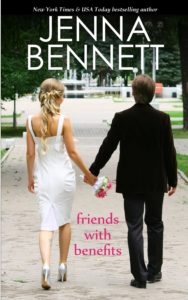 Health benefits, that is.

An accidental pregnancy has left her jobless and broke, with no money to cover her car payment or rent, let alone prenatal care and childbirth.

When next door neighbor Owen Taylor offers a marriage of convenience – room, board, and medical insurance – it’s an answer to prayer. But as they settle in together, Kaylee can’t help but wonder what Owen gets out of the deal.

Nice guy Owen has been quietly pursuing Kaylee for months, but she’s never given him the time of day. Now that he’s gotten her into his life and his bed, he’s not about to give her up.

But when Kaylee’s baby daddy comes knocking, what will Kaylee do? Does she choose her husband, or her baby’s father? The man who knocked her up… or the one who put the pieces together afterwards?

He was everything Kaylee had always wanted: tall, dark, and handsome, well-dressed and well-spoken. The suit he wore had probably cost more than all her clothes put together, and the keys he left on the table for a moment, before he grabbed them and dropped them in his pocket, were attached to a medallion with a Mercedes-Benz emblem. When he introduced himself—“I’m Gil. Gil Norris. You know, Norris Industries?”—that clinched it.

Kaylee gave him her best smile. “Hi, Gil. I’m Kaylee. What can I get for you?”

He smiled back, showing off a set of perfect white teeth. Since no one was that genetically blessed, the Norrises had probably spent a mint on orthodontics and bleaching. “How about a beer? And your address?”

Holy cow. Normally she’d give a guy a hard time for talking to her like that—she was a waitress, not on the menu—but he was gorgeous, not to mention Gil Norris, of Norris Industries. And he wanted her?

But maybe he was just joking. She reeled in the fantasies already running rampant—and naked—through her mind. “What kind of beer do you like?”

“Coming right up.” She wandered over to the bar, making sure to swing her hips a little extra hard in the short shorts, just in case he was watching. Before she headed back with the beer, she checked her makeup in the mirror behind the bar, fluffed her bangs and adjusted the neckline of the clingy tank top down another inch, to where it barely covered her bra. And then she put a bit of extra swing in her hips on the way back, too, for good measure.

He watched her the whole way across the floor, grinning, and when she put the beer in front of him, he asked, “When do you get outta here?”

Kaylee shifted onto one foot and stuck the other hip out. Chest, too, while she was at it. She wasn’t as well endowed as some of the other girls, but she was a respectable C-cup, nothing to sneeze at, and the snug top did nothing to hide her assets. “Not until late. One o’clock. Maybe later.”

He lifted the beer and toasted her before taking a swallow. “You look like you’re worth waiting for.”

Really? He was hitting on her, when there were girls here who were a lot better looking? Alana could have been a model, as gorgeous as she was, while Kaylee, frankly, had a bit too much junk in the trunk. And Melody was a double-D, so Kaylee’s single-Cs couldn’t hope to compete. Yet Gil Norris of Norris Industries was hitting on her?

She gave him another smile, along with a flutter of eyelashes. “If you’re still here when I get off, I guess you’ll find out.”

OK, then. Kaylee blushed—she hadn’t meant to be so crude—but she managed another smile. So he was a little direct. He was Gil Norris, so the normal rules didn’t apply, right?
HE STUCK AROUND for the next couple hours, nursing his beer and watching her. And when Peckers Wings and Beer closed at one o’clock, he was still waiting.

“Looks like someone’s getting lucky,” Melody giggled as they began straightening up. “Friend of yours, Kaylee?”

Kaylee hesitated. Part of her wanted to tell them exactly who was waiting for her, but she was afraid if she did, Melody or Alana would sashay over and try to steal him. The heir to the Norris fortune didn’t come along every day, and if they knew who he was, she wouldn’t give a red cent for her own chances of going home with him. So in the end, she just said, “Yeah,” and kept cleaning.

Kaylee straightened. “You sure?”

“Of course.” Alana smiled, and flipped her long, black hair over her shoulder. “You’d do the same for one of us, if we got lucky.”

“Just be prepared to spill all the details tomorrow!” Melody giggled.

“Right.” Kaylee took her apron off and smoothed her hair. “Do I look all right?”

“You look fine,” Alana said. “I don’t think he cares, anyway. He’s been undressing you in his head all night long. You probably won’t make it past the back seat of his car.”

She gave him a big smile as she approached the table, and couldn’t avoid noticing how his eyes lingered on her chest and the apex of her thighs. “Ready?”

“Always.” He surged to his feet, handsome in his expensive suit.

“You wanna take my car or yours?”

“I’ll follow you,” Gil said, dangling his key chain from one finger. That was definitely a Mercedes emblem catching the light. “Or give me your address and I’ll meet you there.”

Kaylee hesitated. Was she stupid, thinking of bringing him home? She didn’t really know him. What if he tried something?

Then again, she did know who he was. He was Gil Norris, and he wanted her.

She smiled. “I live on Riverside Drive, in the Panorama Townhouses. Unit 203. You can follow me there if you want.”

“I know where it is,” Gil said. “Fifteen minutes?”

She nodded. And went one way—through the back door to the parking lot where her car was parked—while he went the other, out the front door to the street.

Kaylee drove the whole way home with her heart pounding. Gil Norris… If she played this right, maybe he’d want to see her again. Maybe he’d want to keep her around for a while. Maybe even a long while.

Maybe he’d want to marry her. Or maybe not—he was born to money while she was a waitress from the wrong side of the tracks—but stranger things had happened. She’d just have to knock him off his feet and hope for the best.

When she pulled into the parking space outside her townhouse, he was nowhere to be seen. She’d have expected a Mercedes to get there faster than her little Nissan Coupe, but maybe he’d had farther to walk to get to his car.

She was on her way to her door when lights turned in through the gate. A car rolled into the empty space next to hers. It wasn’t a Mercedes, though, just a plain old Toyota. And the man who got out and greeted her wasn’t Gil Norris. He was tall, but not really very dark, although she supposed he was handsome enough, apart from the glasses.

“Hi, Kaylee.” He pushed them up his nose with one hand while the other clutched a brown bag with some kind of food in it.

“Hi, Owen.” Kaylee sniffed. Chinese? He kept late hours, if he was only getting around to eating dinner now.

“You coming home from work?”

She nodded, resisting the temptation to point out the obvious: her tank top with the chicken face stamped across the chest—the eyes centered on her boobs and the beak pointing down to her navel and below—along with the word CHICK spelled out across her ass. Really, the Peckers uniform—short white terrycloth shorts and bright yellow tank top—was hard to mistake for anything else. And it was July, and still hot in spite of it being the middle of the night, so she wasn’t wearing anything to cover it up.

“Have you eaten? There’s enough for two, if you want to come in.” He held up the bag, smiling tentatively.

“Not tonight,” Kaylee said, and smiled back. He was a sweet guy, just not her type. “I’m waiting for someone.”

“Maybe.” He hadn’t lived next door very long, just a month or two, and she’d taken him up on the invitation once before, when he’d offered and she’d had nothing better to do. It had been the afternoon then, not the middle of the night, and he’d been nice. Polite. Hadn’t tried to jump her, as if treating her to a meal meant he was free to treat her as dessert. “I appreciate it.”

“Anytime,” Owen said sincerely. After a moment he added, “I guess I’ll just…” He gestured to his own door, next to hers.

Kaylee nodded. “I’ll see you around.”

“Yeah.” He turned away and then turned back. “You’re being careful, right?”

Owen nodded again. “Scream if you need me. The walls are thin. I’ll hear you.”

Mental note: no screaming during sex. “I appreciate it.”

“Anytime,” Owen said again, and disappeared inside. Kaylee turned toward her own door, key in hand. As she was pushing it open, she heard footsteps behind her, and turning, saw Gil coming across the parking lot. He must have parked on the street.

“You can bring your car into the complex, you know,” she told him when he got close enough that she didn’t have to raise her voice. It was late, and people were asleep. Except Owen. “There are guest spaces over there.” She pointed to the opposite wall, where a half dozen guest spots were clearly outlined on the blacktop.

Gil shrugged. “I found a space right outside. And now that I’m here, I don’t feel like going back out there.” He smiled in a way that curled her toes.

Kaylee resisted the urge to fan herself. “I just thought you might want to park the car somewhere safer. You don’t want anyone to come along and steal it. But it’s yours, and you can put it anywhere you like.”

“It’s insured,” Gil said with a shrug, as if a Mercedes more or less was no big deal. For a Norris, maybe it wasn’t. “And I know exactly where I want to put it.” He winked, the innuendo heavy.

He was standing just a bit too close. And he smelled good, if a little strong. Beer and aftershave. Her voice came out breathless. “Where’s that?”

“Here,” Gil said and put a hand to her crotch. When Kaylee gasped in surprise, he took advantage of it to slip his tongue into her mouth. The door closed behind them as Kaylee reached up to wrap her arms around his neck.