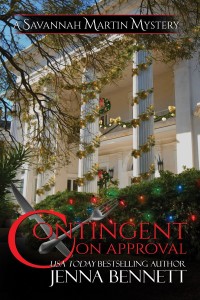 It’s the morning after the events of A DONE DEAL, and Savannah is looking at Rafe Collier, a pair of fuzzy handcuffs, a economy sized box of condoms (one of which plays Christmas carols), and the rest of her life… but first, there’s Christmas dinner with the Martins to get through.

Between Margaret Anne at her most poisonous, the ugliest Christmas sweater the world has ever seen, and yet another engagement ring under the tree, Savannah has plenty to worry about, not the least of which is whether Rafe will still want to stick around after dessert.

As if winning her home-town bad boy wasn’t hard enough, now she faces the monumental task of winning his acceptance by her family.

Will Rafe survive Christmas dinner with the Martins? Will their relationship survive some tough conversations they’ve been avoiding? Will Savannah finally get to eat dessert?

Carefully, without disturbing the arm holding me close, I twisted so I could look at him. And as usual my heart lurched and my breath went. Not just because he’s beautiful, although he is, but because I love him, and I almost lost him, and I didn’t think I’d ever get him back, and now that I had, the feelings were so big I couldn’t breathe.

But he’s beautiful, too.

For the past couple of months, whenever I’d seen him, he’d had longer hair, perfectly gelled, and a little goatee he’d cultivated to pretend to be someone he isn’t. Literally. It’s a long story.

When he showed up last night, he was back to looking like himself again. His hair was shorn into the barely-there crop he’s been wearing since he grew out of the cornrows he had in high school, and his face was smooth-shaven. The only thing remaining was the small stud in his ear. He hadn’t had a pierced ear before. Jorge Pena, the man he’d been pretending to be, did. And since that particular likeness had been easy to emulate, Rafe had pierced his ear too.

The dragon tattoo Jorge had had on his back was a different matter. It would have taken too long to have that done, and it would have looked too new, so Rafe’s had been a fake. It was gone now, or mostly gone. There was still a faint outline, but it would fade over time. The only tattoo of his own that he has, is a viper wrapped around one bicep. It was looking at me, sticking out its little forked tongue.

I stuck mine out in return, and was rewarded with a low chuckle. “Morning, darlin’.”

“Good morning.” I blushed. Not exactly the sultry, seductive image I wanted to present, that one.

“Is it?” His eyes were only half open, deep and dark under long, sooty lashes.

He stretched, hard muscles sliding against my body. “Did you think I’d sneak out in the middle of the night?”

I hadn’t. Now I wondered if I should have. “Would you?”

He settled back down into the pillows, his arm still snug around my waist. “I usually do. Avoids that awkward morning after.”

We’d had a few awkward mornings after, he and I. He’d never snuck out on me, though. Then again, we’d always been in his bed the next morning. But aside from that, it had usually been me who couldn’t wait to leave, shocked and appalled all over again once daylight came that I’d succumbed to temptation and slept with him.

There’d be none of that today. “This isn’t awkward.”

He smiled. “It’s a little awkward.”

“What’s awkward about it?”

He did a quick eyeroll, indicating the room. My childhood room, on the second floor of the MartinMansion. Virginal white sheets, antique four-poster, bed-hangings, and all. It hasn’t changed much in the time since I left it to go off to finishing school, and to be honest, it didn’t change much in the hundred years before that either.

“I ain’t being silly, darlin’. It’s a fact. A hundred and fifty years ago, they’d lynch me for this.”

“It’s true. My aunt told me yesterday. It happened just after the War Between the States. If I remember correctly, my great-great-great-grandfather went off to fight the Yankees, leaving Caroline at home to hold down the fort. With the slaves. I’ve always known that. It’s a source of great family pride.”

“Sorry. But when you’re from an old Southern family, it’s important to be able to prove you were on the right side in the conflict.”

“People still care about that?”

“Some people do. My ex-husband’s family did.”

A corner of his mouth curled up. “Thought I’d made you forget about Bradley.”

“You have. Totally. Anyway, Caroline had an affair with the groom, either before or after her husband was killed in action. She got pregnant.”

I nodded. “Haven’t you ever wondered why my sister Catherine looks different from Dix and me? We’re blonde and blue-eyed, but she has darker hair and brown eyes?”

“Dix and I take after mother’s family, the Georgia Calverts. Catherine looks like the Martins. And great-great-grandfather William was part black.”

I had no idea how big a part. I’d looked at his picture my whole life, and I’d never once thought he looked African-American. But he was definitely dark. Hair, eyes, skin tone. Chances were that a male Martin—or a friend—in an even earlier generation had also dabbled in the pool, and the groom might have been part white. That would make William only about a quarter black, maybe even less. Enough to pass as white, at least to someone who didn’t know the story.

Rafe was quiet for a minute. “Your mother know about this?”

“Surely not.” Although she wouldn’t be thrilled.

“You planning to tell her?”

“How she treats you later today.”

“Christmas dinner,” I said. “At my sister’s house.”

He stared at me. “You’re taking me to Christmas dinner at your sister’s house?”

I stared back. “You mean you don’t want to go?”

He did a sort of squirm, one I’d never seen him do before. “It ain’t that I don’t wanna go, darlin’…”

“They’ll be nice to you. Most of them.” All except mother. She’d be excruciatingly polite.

“I ain’t afraid of what they’ll do to me,” Rafe said. “I’ve been in more uncomfortable spots than your sister’s house for Christmas dinner.”

No question about that. “What is it you’re afraid of, then?”

“I ain’t afraid,” Rafe said. “I just don’t wanna upset your family on Christmas. That’s why I wasn’t gonna stay last night, either.”

“I told you. You couldn’t drive all the way here to tell me I could have you, and then leave before I could actually have you.”

Yes, I had. But that was last night. “I haven’t had you this morning.”

“You can have me this morning. If you still want me.”

“I always want you,” I said. “But first I want to finish talking about this.”

He shook his head. “Ain’t nothing to talk about, darlin’. Me being around at all is gonna be a big enough deal for your family to swallow. Don’t have to shove it down their throats on Christmas.”

“I’m not shoving you down anyone’s throat. But I don’t want to hide, either. And that means they’ll have to get used to seeing you.”

He didn’t answer, but he looked mutinous.

“Did you have other plans?” He didn’t have any family left in Sweetwater, and I certainly didn’t want him to sit alone on Christmas.

And then it hit me and I felt guilty. “Were you planning to spend the day with your grandmother?” His paternal grandmother, the grandmother he’d only met a few months ago. Mrs. Tondalia Jenkins, in Nashville.

His lips curved, but the smile was bittersweet. “She don’t know it’s Christmas, darlin’. It’s just like any other day to her. Half the time she don’t know me when I walk in.”

“I’m sorry.” He’d found his grandmother—his father’s mother—at thirty, only to have her not recognize him half the time. I reached out and touched his cheek. “We can go visit her if you want. Together. Afterwards. Dinner’s at one. It’ll be over by three or four. We can be back in Nashville by five, five thirty. We could go see Mrs. J then.”

He tilted his head to kiss my palm. “She’d like that.”

“We could stop somewhere on the way and pick up some flowers or something. Or a snack. She likes ice cream.”

“Sounds good.” His lips had left my palm to skim down to the pulse beating in my wrist. He kissed me there too, and then moved on. The next stop was the crook of my elbow, where the thin skin tingled at the touch of his lips. For good measure he gave the spot a little lick before moving on. By the time he got to my shoulder, I had forgotten about Mrs. Jenkins and Christmas dinner and all the rest of it. And that’s when he pushed me over on my back and grinned down at me. “Merry Christmas, darlin’.”

“Merry Christmas,” I said, breathlessly. And that’s the last thing I said for a while.