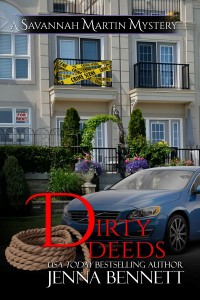 With hotels in downtown filled to capacity months in advance, real estate agent Savannah Martin decides to pick up some extra money renting out her empty East Nashville apartment. She’s living with her boyfriend, and the place is just sitting there, begging to be put to use.

But when her latest tenant ends up dead—strangled in Savannah’s bed by what might have been a paying customer—the promise of easy money quickly turns sour.

As the hunt for the killer leads to their shared hometown of Sweetwater, Tennessee, Savannah’s boyfriend, TBI agent Rafe Collier, is tapped to help with the investigation. But a familiarity with the town and the people in it isn’t necessarily a benefit when the main suspect in the murder is the man Savannah decided not to marry. The same man who has never forgiven Rafe for stealing her away…

When the phone rings before seven in the morning, it’s rarely good news.

Although when the phone beside my bed rang at 6:28 AM on the last Sunday in May, the reason I usually worry was lying next to me, so at least I knew the bad news wouldn’t be about him.

Rafe was safe, curled up behind me in bed, with a possessive arm around my waist and a protective hand splayed over my stomach, where his son or daughter was getting ready to serve up my usual helping of morning sickness.

Rafe’s presence only helped momentarily, as I have plenty of other hostages to fortune. My brother, my sister, my brother-in-law, three nieces, two nephews, assorted aunts and uncles, and quite a few friends.

Not to mention my mother. We don’t always get along, but I’d hate it if anything happened to her, especially before she can come around to my way of thinking and embrace her future son-in-law.

And speaking of her future son-in-law… Rafe has a grandmother and a son of his own, along with a few friends who might also be the reason for this call. The list of potential victims just kept growing as the echoes of the phone rang in my ears.

“You want I should get that?”

Rafe sounded wide awake, although I knew he’d been asleep just a minute ago. That’s what ten years of undercover work will do for somebody: make him able to go from dead sleep to wide awake at the sound of a ringtone.

He didn’t argue, just settled back down, long fingers making circles across my rounded stomach. Going a little farther south with each sweep.

I knew where those fingers were headed, so I picked up the phone with the intention of getting rid of whoever was calling as quickly as possible. “What?”

There was a beat, and then— “Manners, Savannah,” a voice murmured.

Rafe’s hand stopped making circles. Even he draws the line at trying to get into my panties while I’m talking to my mother. Or perhaps it’s simply that the thought of my mother acts like a bucket of ice on his libido.

He removed his hand and flopped over on his back with a sound that was halfway between a laugh and a groan.

Yes, of course. I resigned myself to doing without any more of Rafe’s attention until I could get her off the line. “What’s wrong?”

“Are you alone?” mother inquired.

“No.” My voice was laced with a heavy dose of ‘duh,’ but of course I couldn’t actually say so. Not to my mother. “It’s six-thirty in the morning on a weekend. We’re still in bed.”

“You and…?” Mother hesitated delicately.

I took the phone away from my ear and looked at it before putting it back. Amnesia? Early onset dementia? She’s only fifty-eight, but I suppose stranger things have happened.

Probably it was just denial, pure and simple. I proceeded to remind her who I was sleeping with. “My fiancé. The father of my baby. Remember?”

“Rafael,” my mother said, with that inflection of sour lemons only she can manage.

“That’s right.” And she had interrupted something—something I had every hope might go somewhere—so if she’d kindly just get to the point…?

But of course I didn’t say that, either. My mother raised a lady. Although I thought it, and trusted that the thought came across in my voice.

Except it didn’t seem to, because Mother didn’t speak. “What do you need?” I prompted, when I determined the silence had gone on long enough.

She sighed. “I thought perhaps Todd…”

Todd? She called me at six-thirty in the morning because she thought I had Todd Satterfield in my bed?

“I’m sorry,” I said. “Rafe’s not really into this sharing thing.”

And if he had been, Todd would have been the last person he would invite to join us.

Mother’s dismay rolled down the telephone line even before her shocked exclamation reached me. “Savannah!”

“Sorry,” I muttered, my cheeks hot, while behind me, Rafe made a choking sound. I glanced at him over my shoulder, and saw that he was struggling not to laugh.

I turned away. The sight of him—all hard muscles and golden skin outlined against the white sheets—was distracting, and I couldn’t afford to be distracted right now. “Why on earth would you think Todd would be here?”

Behind me, Rafe went still.

“I thought maybe you’d made up,” Mother said hopefully.

“Rafe and I are engaged, Mother. We’re living together. I’m having his baby. We’re getting married.” Just as soon as we could figure out the details. “There’s nothing for Todd and me to make up.”

Mother didn’t respond, and I tried my question again, using different words this time. “Did Todd say he was coming here?”

“No…” Mother said, making it sound like she wasn’t sure.

She made a sound. Something like a sigh. “That he was going to Nashville to see a friend.”

We were hardly friends anymore. Todd Satterfield had been my boyfriend for a year in high school, but that was eleven or twelve years ago, and much more recently, I had hurt his feelings and wounded his pride by saying no to his marriage proposal. And then I had added insult to injury by shacking up with Rafe, who—by all accounts, especially Todd’s and Mother’s—was totally unsuitable for me.

“We didn’t think he knew anyone else in Nashville,” Mother said.

Why? Todd lived just over an hour away, and had for most of his life. It was very possible—indeed, likely—that he knew people in Nashville.

However, that didn’t answer the most important question. “I still don’t understand why you’re calling me to ask if he’s here.”

She did a sort of audible squirm, one I could hear through the phone. “He didn’t come home last night.”

So? “He’s thirty years old, Mother. I’m sure it isn’t the first time he’s been out all night.”

Bob Satterfield is Todd’s father, and my mother’s boyfriend. He’s also the sheriff of my hometown of Sweetwater, Tennessee, about an hour south of Nashville. And the fact that Mother was communicating with him at six-thirty on a Sunday morning, made me wonder whether Todd might not be the only one who’d been out all night.

“I’m sure he just got caught up in the moment and forgot,” I said.

It sounded to me as if perhaps Todd was moving on. I’d turned down his proposal before Christmas, and he had moped around for a few months trying to change my mind, until I got pregnant and it became obvious that I wasn’t about to dump Rafe for him. Maybe he’d found himself a replacement. Or at least someone to pass the time with until he met the (new) girl of his dreams.

Mother murmured something that sounded vaguely like acquiescence, or at least not outright dissent.

“I’ll let you know if I hear from him,” I said. “But he’ll probably be home soon.” Wearing the same clothes he’d left in yesterday and looking a bit sheepish and worse for wear. “Have you spoken to Dix?”

Mother said she hadn’t. “You think he might know what’s going on?”

If anyone did, it was likely to be my brother. “They’re best friends.”

If Todd had someone new in his life, chances were he’d have told my brother about it. Unless my relationship with Rafe had ruined Dix and Todd’s friendship, too.

Although if it had, Dix hadn’t said anything about it.

Then again, he didn’t really talk about Todd, so maybe they didn’t spend much time together anymore and I just hadn’t realized it.

A ribbon of guilt twisted through me at the thought. I didn’t want to be responsible for any bad blood between my brother and his best friend.

But then I banished it. I have the right to fall in love with anyone I want. And just because Dix and Todd are close, doesn’t mean I owe it to Todd to marry him.

“Let me know how it goes,” I told Mother, and hung up before she could say anything else.

There was a moment of silence.

I turned to face him. “Todd’s missing.”

“Or not missing, exactly. Apparently, he drove up to Nashville last night to see a friend.”

“And your mama thought he was coming to see you?” He arched a brow. Just one. The other didn’t even twitch. “Something I should know about, darlin’?”

Me, either. “No,” I said. “I haven’t seen Todd since Easter. And we didn’t talk then. Which you already know, since you were there.”

He nodded. “He prob’ly just got lucky.”

That’s what I was thinking, too. “Mother says he usually lets his dad know if he isn’t going to be home. But one thing might have led to another, and he forgot.”

And now that the phone call was over and we were alone again, maybe one thing could lead to another here, too. I reached out and trailed a fingertip down his arm. The muscles quivered and then flexed under my touch. I smiled appreciatively. Rafe smiled, too, but didn’t move.

“You know.” Seduce him, rather than vice versa.

“It ain’t gonna hurt you to work for it,” Rafe said, “but to tell you the truth, I sorta changed my mind.”

I pouted. “It’s Todd, isn’t it? You don’t want him to intrude on our private time.”

“If he were at the door,” Rafe said, “that might be a consideration. But no, that ain’t it.”

“You seemed interested before.” I hadn’t forgotten that hand stroking lazy circles on my belly.

Right. And whether that was a literal or metaphorical description, I knew what he meant. I scooted down and curled up next to him, my hand on his chest. “She’s gone now.”

“She ain’t gone. She’s down there in Sweetwater thinking about us in bed together.”

“She wouldn’t be that crude.”

He glanced at me, and I elaborated. “A Southern Belle doesn’t imagine what someone else is doing in bed. It would be unladylike.”

His lips curved. “They teach you that in finishing school?”

“Among other things.” I let my fingers go walking again, across his chest this time. “Are you sure I can’t make you forget my mother? She’s probably getting busy with the sheriff.” Doing something very like what we were doing.

“Sorry.” It wasn’t a picture I wanted in my own head, either. My mother doing the naughty with Sheriff Satterfield… talk about a mood-killer. “Try not to think about it,” I advised.

“That what you’re doing?”

“How’s that going for you?”

“I could use a little help,” I said, skimming my hand down his chest to his stomach, over warm skin, taut and smooth as silk.

He turned toward me. And that was the last thing either one of us said for a while.