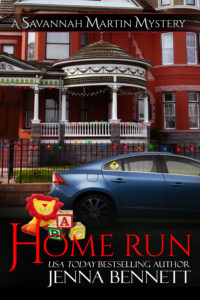 …and it’s back to Sweetwater to celebrate the holiday with the Martin family, and what’s left of the Colliers.
This time, Savannah and Rafe have their infant daughter with them, and everyone’s cooing over the new addition. But Carrie isn’t the only thing that’s changed. Several other people have news, and some of the directions things are going might alter the course of several lives, including Rafe’s and Savannah’s, for the foreseeable future.
Join the Martins and the Colliers, with their friends and relatives, for another Christmas in the Martin Mansion in Sweetwater!

The first month after the baby was born passed in a blur. I’d wake up, nurse, change the baby’s diaper, and go back to sleep. Everyone was telling me to sleep when the baby slept, so I did. As a result, I spent the time between Thanksgiving and Christmas getting about twelve hours of sleep a day, in between bouts of crying and eating. The baby’s, mostly, but I tried to remember to eat, and did my own share of crying, too.

I spent the first week in Sweetwater in my mother’s house, where she and my sister Catherine and Mother’s best friend Audrey and Audrey’s aunt Tondalia—who also happens to be my husband’s grandmother—fussed over me and the baby. The next weekend, Rafe drove down and picked me up, and took me back to Nashville with him. And I spent the three weeks after that mostly sitting around at home, when I wasn’t sleeping. My young friend Alexandra Puckett came by to visit, starting to look pretty pregnant herself. And a couple of agents from the real estate firm where I work stopped by: Heidi Hoppenfeldt to coo over the baby—she’s pushing thirty with no boyfriend in sight, so her biological clock was probably starting to tick more loudly—and Timothy Briggs to drool over Rafe.

And then Christmas rolled around again, as it does every year.

“We don’t have to drive to Sweetwater if you’re too tired,” Rafe told me on Christmas Eve morning.

I stared at him. “Why would I be tired? I’m sleeping sixteen hours a night.”

“So are you,” I pointed out, since he was. I tried to take most of the burden off him, since he was going to work every morning and I wasn’t, but he still got up sometimes when the baby cried in the middle of the night. And even if he didn’t physically get up, he woke up, and that wasn’t much better.

“Not as much as you.” He grinned at me over her fuzzy head. “I don’t have nothing she wants.”

Not entirely true. Sure, I might have what it took to feed her. But I’d seen her snuggle up on her daddy’s chest and go to sleep while he hummed to her, too, so it wasn’t like he didn’t have anything at all to contribute.

That’s where she was right now, as a matter of fact. A small—very small—lump in footed pajamas, curled up with her head on Rafe’s chest while he supported her with one big hand on her fuzzy, pink butt. Her eyes were closed, with long, dark lashes—inherited from her daddy—fluttering against her cheeks, and her little mouth pursed. She was blowing spit bubbles in her sleep, and leaving a wet spot on Rafe’s T-shirt.

“It’ll wash.” He sounded so calm he was positively zen. It was hard to reconcile the guy I’d met just over a year ago—convicted ex-con, undercover special agent for the TBI: tall, dark, and dangerous—with the doting daddy slouched on the sofa cuddling his month-old daughter. Most of the people he’d dealt with in his life probably wouldn’t believe me if I told them. It would take photographic evidence, and even that might not be enough.

We’d come a long way in just over a year.

“Is there a reason you wouldn’t want to go to Sweetwater for Christmas?” I asked.

Like me, he’d grown up there, in the small town just over an hour south of Nashville. Unlike me, he didn’t really have the best memories of childhood. He didn’t like to go back.

But things were different now. We were married. My mother adored him. The rest of my family loved him. And Audrey and his grandmother were there. The only family he had in the world, other than a son named David, who lived with his adoptive parents on the other side of Nashville. David would be spending Christmas with his own family, the people who had raised him. We had dropped off Christmas gifts and shown off the baby—David’s little half-sister—a few days ago.

Rafe shook his head. “I just don’t wanna tire you out. The baby’s a lot of work.”

She was. But— “Everyone’s expecting to see us.”

Or her, more accurately. Caroline. Now that we were parents, nobody cared what we did anymore. It was all about the baby. People stopped by to see the baby. My mother invited me home so she could spend time with the baby.

Rafe nodded. “I just wanna make sure you’re up for it.”

“I’ll be fine,” I said. “We’ll only stay a couple of days. For the party tonight and dinner tomorrow. And then we’ll go home. You want to see your grandmother, don’t you?”

Of course he did.

The last thing I saw before I left the parlor and went into the hallway, was him closing his eyes.