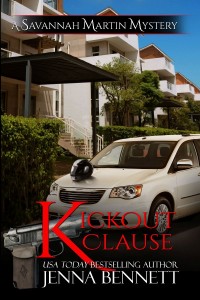 When Shelby Ferguson, Savannah’s ex-husband’s new wife, begs Savannah’s help in figuring out what’s going on with Bradley, Savannah can’t in good conscience say no. Shelby has no one else to turn to, no one to whom she can admit that her marriage is on the rocks and that Bradley may be straying.

But helping Shelby turns out to be just the tip of the iceberg. With two different sets of buyers vying to purchase Mrs. Jenkins’s house, and an escaped prisoner targeting Savannah, she has more than enough to deal with. And that’s before TBI rookie Manny Ortega is shot down in cold blood.

With Savannah’s boyfriend Rafe Collier, and their friend homicide detective Tamara Grimaldi, busy looking for Manny’s murderer, it’s up to Savannah to juggle buyers and adulterers and vandals and murderers, and come out on top… without losing her Southern Belle poise or her life in the process.

In real estate, a kickout clause is something that allows a seller—under certain circumstances, after accepting an offer—to accept another offer and kick the first one to the curb.

In life, an equivalent would be something like accepting an offer of marriage from a gentleman of means, while reserving the right to accept an offer from another gentleman of bigger means, should he happen to come along before the marriage is consummated.

Rafe finished the renovations on his grandmother’s old house on Potsdam   Street the first week in March. After three days on the market, we had an offer to purchase that included a sale-of-home contingency. In other words, the potential new owners already had a condo they had to sell before they could buy Mrs. Jenkins’s house. And although there wasn’t really much doubt that they’d find someone to buy it—Nashville’s real estate market was reasonably brisk, and the location, in the downtown area called the Gulch, was hot—we still ran the risk of something going wrong, and of having to wait month after month while hoping and praying that things would work out.

So being the smart and savvy real estate agent that I am, I advised my client—and boyfriend—to accept the offer but to attach a rider known as ‘seller’s right to continue to market property.’ That’s what set up the kickout clause. And it was a good thing I did, because two days later we received another offer, this time without the sale-of-home contingency. The second set of potential owners had no house or condo they had to sell before they could afford to buy Mrs. J’s house.

At that point, I notified Brian, the agent for the first potential buyers, that his clients had 48 hours to decide whether they wanted Mrs. J’s house badly enough that they were willing to take a chance on ending up with two properties for a while if they couldn’t sell the condo in a timely manner, or whether they wanted to withdraw their offer and let the other people have the house.

While they were thinking about it, I received a phone call from Shelby Ferguson asking me to meet her for coffee.

Shelby is my ex-husband Bradley’s wife. She was his paralegal while we were married, and she became his wife less than two weeks after our divorce was final.

In other words, I had no reason whatsoever to like her, and none at all to agree to meet her.

And I must have made my feelings clear, because she said, “Please, Savannah. There’s nobody else I can ask.”

I found that very hard to believe, and told her so. The last time I’d seen her, in November, she and a girlfriend had stopped by an open house I was hosting, and they had whispered about me behind my back. I was pretty sure I’d overheard the word ‘chunky.’ To add insult to injury, Shelby had been pregnant and glowing, while I’d been battling morning sickness and weight gain and wondering whether Rafe would be happy or upset about knocking me up.

“It’s true!” I could hear panic lacing through her voice. “I can’t tell any of my friends that my husband… that Bradley…”

She ran down before she could get the damning information out, but I could read between the lines. She couldn’t tell her friends and family that her husband was a jackass, but she could tell me, because I’d been married to Bradley too, and was only too familiar with that fact.

I allowed myself a few seconds to gloat—silently—before I took pity on her and agreed to meet.

She must really be desperate, because she said, “Now?”

“Sure,” I said, throwing caution to the wind. And hey, this way I got it over with. No need to fret about it until tomorrow if I took care of it today. “There’s a Starbucks on Hillsboro Road, right?”

We couldn’t? I was trying to do her a favor, by picking a meeting place close to Bradley’s townhouse—the one I’d shared with him before Shelby entered the picture—so she wouldn’t have to drive so far in her condition.

“I’ll come to East Nashville,” Shelby said. “Nobody will recognize me there.”

Oh, sure. These days, people from all over town come to East Nashville to eat and shop, even from Shelby’s snobby Green Hills. But if she preferred to believe she’d be safely slumming in my neighborhood, she was welcome to.

“There’s a coffee shop on the corner of Tenth and East Main,” I told her. “Brew-ha-ha.”

I told her it was, and resisted the temptation to ask whether she didn’t think it was a cute name. Between you and me, I find it a little too cute, but the coffee’s good. “It’s just after you pass the gym.”

I checked my watch. Less than forty five minutes from now. “That’s fine.”

“I’ll see you there.” She clicked off before I had the chance to respond. I arched my brows and dialed Rafe.

“Something funny just happened,” I told him when he answered.

I could almost see one eyebrow arch. “Strange funny? Or ha-ha funny?”

A little of both, actually. “Shelby Ferguson called. You know, Bradley’s new wife?” Or not exactly new—they’d been married for almost three years—but new since me.

There was a moment’s pause. “Why?”

“She didn’t say. Just that she needed to talk to me. And that she couldn’t talk to anyone else.”

“Maybe she found out you had dinner with him back in December,” Rafe said.

Dear Lord. I could feel myself turn pale. I had had dinner with Bradley in December. And he’d been very concerned that Shelby not learn about it, too.

But surely, since we were into March, if she was going to hear about it, she would have heard by now? “You don’t really think so, do you?”

There was a pause. “He cheating again?”

“I wouldn’t be surprised,” I said. “He cheated on me. There’s no reason he wouldn’t cheat on her.”

In fact, I’ve never understood women who marry cheaters—men they’ve been sleeping with while he was married to someone else. If he cheated on his first wife, do they really think he won’t cheat on them?

“You gonna meet her?” Rafe asked.

“She ain’t wasting any time.”

“You want I should go with you?”

“I don’t think I need a bodyguard,” I said, “do you? She must be at least eight months pregnant by now. I don’t think she’d risk a fistfight.” And if she did, I could probably take her.

“Not at all. Even if she has found out about that dinner back in December, it wasn’t like it meant anything. I just needed some information about Bradley’s uncle. It’s not like I’d want him back.”

“Absolutely not. Why would I want Bradley when I have you?”

I couldn’t, either. “And anyway, it isn’t like Bradley would be interested in taking me back even if Shelby weren’t in the picture. If he’s cheating again, he’s moved on. To someone who isn’t pregnant and who can still do it on top of the desk.”

There was a beat. “I thought you said he was boring in bed.”

“He was boring with me. But I’m sure he and Shelby did it on the desk. Or in the broom closet. They worked together, after all.”

Rafe didn’t say anything for another second. “I have a desk,” he told me.

My boyfriend works for the TBI, the Tennessee Bureau of Investigation. For the past ten years, from the time they sprang him from prison at twenty until last December, he worked undercover, doing his best to eliminate a far-reaching SATG—South American Theft Gang—with fingers in a lot of pies all over the southeastern United States. In the process, he blew his cover sky high, and had to retire from undercover work. He retired from the TBI altogether for about two months, until civilian life drove him crazy and he decided to accept the position they offered of training other undercover agents. These days, he spent most of his time in the gym, teaching rookies how to become Quick Draw McGraw and excel at hand-to-hand combat, and the rest of the time in the field, teaching them surveillance and how to evade capture. But he did have a desk, for whenever he had to do paperwork. It was located in a cubicle, on a floor full of other cubicles, and I draw the line there.

“I’ll make to love to you anywhere there’s a door I can close,” I informed him. “But not in a cubicle at the TBI. You’d probably get fired if we got caught.”

“Not as much as I’d love to get you naked on top of my desk.”

I blushed. “You can get me naked on top of the dining room table instead. Unless you’re working late tonight?”

He’d only had the job for a few weeks, and so far he had worked late a couple nights a week. That was when he took one or more of his charges into the night to play cops and robbers. They’d practice following each other around, on foot or by car, and see who could get away without being caught. It must be fun, because he always came home with a big grin on his face.

“Not tonight. Tonight I’m all yours.”

I don’t think I imagined the innuendo in his voice. In fact, I’m sure of it. When I didn’t answer, because I was too busy fanning myself, he grinned. I could hear it in his voice, even if I couldn’t see him. “Have fun with Shelby, darlin’. Think about me.”

“Sure thing,” I managed.

The last thing I heard before he hung up was a chuckle, low and ripe, the kind of sound that trickles down your back and leaves goosebumps in its wake.