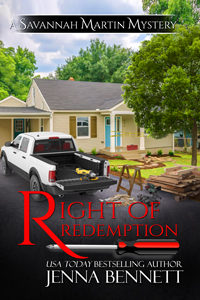 When Savannah and her best friend Charlotte decide to flip a foreclosed property in nearby Columbia, they talk Savannah’s sister Darcy into putting up the money for the renovations, and go to work.

But no sooner have they ripped up the carpet and torn out the kitchen cabinets, than the previous owner shows up and invokes his statutory right of redemption. After four years in prison for a crime he says he didn’t commit, he’s back in town to clear his name, and he wants his house back. And according to Savannah’s legal-eagle brother Dix, there’s nothing anyone can do to stop him.

Until someone drops him in his tracks, with a murder weapon that has Charlotte’s fingerprints all over it.

Savannah’s husband Rafe has his hands full at the local PD, so the murder investigation falls on another detective, one who doesn’t share Savannah’s conviction that Charlotte wouldn’t hurt a fly. But when Savannah decides to do some investigating of her own, it soon becomes clear that there’s more to this flipping fiasco than meets the eye…

“We should go into business together,” Charlotte said.

I lifted my attention from the salad I was picking at—I would have preferred something with more substance, but it was almost three months since Carrie had been born, so it was time to get serious about shedding the baby weight—and stared at her across the table. “What?”

“I need a job if I’m going to stay in Sweetwater.” She didn’t add that so did I, but it was implied. Or if it wasn’t, I knew it. I couldn’t loaf around forever.

She continued, “I could get my real estate license and we could work together. As a team. That’s a thing, right?”

I had no idea what I liked. I’d had my real estate license for going on two years, but I hadn’t managed to sell more than a handful of properties in that time. I just didn’t seem to be very good at it, and I was constantly distracted by other things. My husband, my baby, murder… As a result, I was usually thrilled when I landed any client, and couldn’t care less whether it was a buyer or a seller. The idea of having to share the commission I made with someone else was off-putting. I mean, I made so little as it was.

And aside from that, what if Charlotte turned out to be a better realtor than me? Then I’d feel even worse about myself than I did now.

But of course I couldn’t tell her that. She had enough to deal with, between her impending divorce and custody battle, her kids, and her parents. She didn’t need to hear that I didn’t want to work too closely with her.

So— “It isn’t as easy as it looks,” I told her instead. “You know how, when you watch House Hunters on HGTV, the buyers always pick one of the three houses at the end of the show?”

“That doesn’t always happen in real life. Sometimes you show them dozens of houses, and at the end of it, they don’t like any of them, and they decide they’re just going to rent for a while. And then six months turn into a year, and by the time their lease is up and they’re ready to buy something, they’ve met another realtor in line for coffee, and they don’t call you back. He gets their business. And you did all that work for nothing.”

Charlotte stared at me.

“And it takes time to get a real estate license. At least three or four months of classes. If you started now, you wouldn’t be licensed until the summer.”

I tilted my head to look at her. “Problem?” She had moved in with her parents, in her childhood home, and it wasn’t likely that they were charging her rent. In fact, they were probably thrilled to have her back home, after almost a decade in North Carolina. And I’m sure they were delighted to spend more time with their grandchildren.

“Richard is refusing to give me any money,” Charlotte said, her voice tight. “He put a freeze on our accounts, and he shut down my credit card.”

Richard is the soon-to-be-ex, and father of the children. That’s probably obvious.

“Can he do that? They’re his children, too. Isn’t he responsible for them?”

“He’s waiting for the judge to rule on the alimony,” Charlotte said.

“And until then he expects you to live on air?”

“But they’re his children!”

“He has a new mistress,” Charlotte said, “and a new baby on the way. And she’s a big deal in Charlotte.”

Yes, Charlotte had spent the past ten years in Charlotte. That’s called irony. Or something.

“Well, you’re a big deal here,” I told her. “And the fact that his floozy is a big deal in Charlotte, doesn’t mean that Doctor Dick doesn’t have to provide for the children he already has!”

“Tell that to his lawyer,” Charlotte said.

“Have you talked to Catherine about it?”

Catherine McCall is Charlotte’s lawyer, and also my sister. When Charlotte first arrived in town, she wanted to hire my brother Dix—her high school boyfriend—to represent her. (My entire family, present company excepted, is lawyers.) But Dix, like most men, is squeamish when it comes to nailing another man’s scrotum to the wall for child support. Catherine has no such qualms. She would have had my own ex-husband, Bradley Ferguson, singing soprano if I’d allowed it back when he’d dumped me for his paralegal. (At the time, trying to keep my dignity seemed like a good idea. I’ve since learned that you can’t eat dignity, and besides, he didn’t deserve any consideration from me.) However, I had every confidence that Catherine could do to Doctor Dick what I hadn’t allowed her to do to Bradley.

Charlotte nodded. “We have to wait for the hearing.”

“What are you supposed to eat in the meantime?”

“We’re not starving,” Charlotte said. “My parents are taking care of us.”

“Well, of course they are.” It had been more of a rhetorical question. How did Doctor Dick expect his wife and children to survive until the divorce was final and the settlement decided, if he wouldn’t give them any money? Charlotte had never had a job. She’d married Doctor Dick straight out of college and started popping out babies.

“I need to make some money,” Charlotte said. “I can’t let my parents continue to take care of us. They have their own retirement to think about. But I’ve looked for work everywhere I could think of…”

I nodded. She had asked Dix and Catherine for a job in the law firm. She had asked my mother’s best friend Audrey for a job at the boutique. She had probably visited every medium-to-high class establishment in Sweetwater looking for employment. I’m sure she wasn’t looking forward to starting on the low-end places. Waitressing and cleaning and working the register at the local Walmart…

“We could flip a house,” someone said. It took me a second to realize the voice was mine. And maybe it had sounded strange to Charlotte, too, because she stared at me.

I took the thought out and looked at it. “We could flip a house. Buy it, renovate it, and sell it. We could easily do that in the time it would take you to get your real estate license.”

It would give me something to do, too. I could bring the baby. And I’d have a house to sell once the renovating was done.

“Not exactly.” I mean, Chip Gaines actually knows what he’s doing. Neither of us had a clue. “More like Joanna Gaines without Chip.”