Annie Landon has given up on finding Mr. Right, and has gone out to find Mr. Tonight instead. A conversation overheard 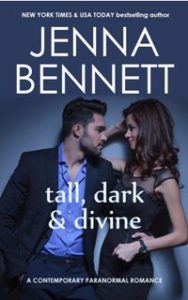 in the bathroom of Dionysus’s Bar, about a jilted and lonely “Greek god” in need of a quick pick-me-up, sounds like just what she’s looking for!

But picking up the Greek god of love for a one-night-stand is easier said than done, especially when he has sworn off mortals forever.

Do a woman looking for love, and a matchmaking god who wants her to find it—with someone else—have a shot at a happy ending?

Will Annie get her man… or will Eros’s golden arrows miss their mark, for once?

The game is on. May the best god—or mortal—win!

“This new twist on Greek mythology is modern and hip, with a playful tone that is reminiscent of the early Dark-Hunter books. Fun and original, the cast of secondary characters will make the reader hope this is just the beginning.” – Anna Dougherty, Romantic Times Book Reviews

Thunder boomed and lightning crackled across the sky. There was a moment of breathless silence, as if creation were gathering itself, and then the deluge started. Fat drops of rain hit the pavement like tiny bombs and exploded, and in a matter of seconds, the gutters ran high with water. The mortals on their way home from work huddled under umbrellas and folded-up newspapers as they scurried past the windows of Made in Heaven matchmaking service, while Eros watched, grimly amused.

The god of love rather enjoyed seeing the mortals in his charge struggle with life’s little inconveniences.

He hadn’t always. Once upon a time, he’d been full of the milk of human kindness and had wanted nothing but good for everyone. Especially the mortals—poor, pitiful creatures with their weak bodies and finite lives. They deserved what little happiness they could grasp in the short time allotted to them.

But that was before the love of his life, beautiful Psyche, had called him a workaholic and run off with some overdeveloped Viking warrior with braids and more brawn than brains. Some Norse godling without a thought in his head except fighting all day and fucking all night and then getting up to do it all over again the next morning.

Ungrateful wench. And after everything Eros had done for her, too.

He lifted the bottle of ambrosia-laced wine and took a deep swallow as he watched a tall young man under an oversized umbrella hurry past the window.

Well, it would be the last time he made that mistake, anyway. Never again would he get emotionally involved with a mortal. It just wasn’t worth the trouble.

You spent years of time and effort pursuing them. You let work fall by the wayside, so people and animals didn’t fall in love, mate, or marry, while the earth grew dry underfoot. You braved the Underworld for them, you woke them from infernal sleep when they stupidly opened the box they were explicitly told not to open, and you lowered yourself and went crawling to mighty Zeus himself to ask for help in making them immortal, just so you could keep them with you forever. And then, after just a few thousand years, this was how they repaid you. By whining that you worked too much and didn’t love them enough before they left you for someone else.

Mortals. Couldn’t live with them. Couldn’t—unfortunately—live without them.

On the opposite side of the street, a sweet-faced young woman came out of the door to the dog bakery and stepped into the rain. Within five seconds, her soft brown hair was sodden and clung to her head like seaweed, while the thin T-shirt molded to her breasts in a way that would have brought a mortal man to his knees.

Eros scowled. She was late today. Had she come out a minute earlier, he could have made sure the young man with the umbrella—Harry Mitchell from the accounting firm down the block—offered to protect her from the rain. Once Harry got a good look at that T-shirt, chances were Eros wouldn’t even have to intervene. But now there was nothing he could do, at least not without exerting effort. Harry must have reached the subway stop on the corner by now, and Annie Landon was on her own. And she had missed another opportunity to make a match. Stupid chit.