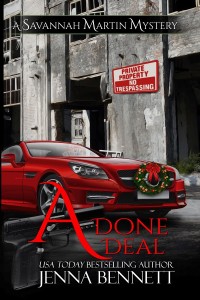 It’s Christmas time in Nashville, and all Savannah wants to unwrap on Christmas morning is Rafe. Unfortunately, things don’t look so good. He’s back in town, but not alone: on his arm is a stunning brunette, just the kind of woman Savannah always suspected was his type.

When Alexandra Puckett asks her help in figuring out a way to stop Maybelle Driscoll from marrying Alex’s father Steven, Savannah jumps on the chance. It’ll give her something to think about other than Rafe and the mysterious Carmen, and anyway, she doesn’t like Maybelle much herself.

Between investigating Maybelle’s past, helping her clients Aislynn and Kylie buy a house, and stalking Carmen and Rafe, she soon has her hands full. And that’s before someone starts gunning for her. Suddenly it’s not a question of unwrapping anything on Christmas morning anymore; it’s a question of whether she’ll even survive to see another Christmas.

“Will you come to your mother’s for Christmas this year?”

Mother has a shindig every Christmas Eve. It brings her children together under one roof, and since the mansion is almost 5,000 square feet, there’s plenty of room for all of us. Dix has two children, and my sister Catherine and her husband have three. The whole family comes, including my Aunt Regina—my dad’s sister—and her husband, and my mother’s best friend Audrey. The others don’t spend the night, of course, since they live in Sweetwater. I do, rather than driving back to Nashville in the middle of the night.

The festivities continue the next day, with Christmas Breakfast and then Christmas Day dinner at one of my siblings’ houses. This year it would be at Catherine’s, since Dix wouldn’t want to, or know how to, cook Christmas dinner for ten or twelve.

Todd nodded. “I’ll look forward to seeing you there, then.”

I don’t know why I was surprised. Mother has been carrying on with Todd’s dad for a while now. Pauline died years ago, just like my dad, and mother and Bob have always gotten on well. I only learned about the relationship a few months back, but the others had known for longer. That’s what comes from living an hour away.

Anyway, it wasn’t strange that she’d want Bob there on Christmas, now that the union was out in the open and everyone knew what was going on. And I suppose she had to invite Todd. He’s divorced and an only child, so it’s not like he has anywhere else to go for Christmas. Dix has been his best friend since childhood. And in spite of the miscarriage and the knowledge that I’d been involved with someone else, mother hasn’t given up on the idea that we’ll end up together.

Todd looked coy. “What would you like Santa to bring you, Savannah?”

Rafe, I though, and put the idea out of my mind. He was gone, he wasn’t coming back, he didn’t want me. I smiled. “Nothing. I have everything I need.”

“God, no.” That brought to mind engagement rings, and I couldn’t imagine anything worse than having to turn down another proposal in front of my entire family on Christmas Eve.

From his expression, it was almost as if he thought a puppy would make up for the baby I’d lost. My baby had been barely bigger than a blueberry when I miscarried, but after all the agonizing I’d done over whether or not to keep it, it had become very real to me. And as much as I like puppies, it wasn’t the same.

“I guess a kitten is out of the question too, then.”

“You could get me a goldfish. I’m allowed to have those.”

Todd’s expression lightened. “Do you want a goldfish?”

“Not really,” I said apologetically. “I was joking. I don’t really need a Christmas present.” There was nothing anyone could give me that I wanted. Especially Todd.

“I’ll figure something out,” he said.

I wondered if I ought to ask him what he wanted for Christmas, but I was afraid of what the answer would be. And I’d bought him a sweater in any case.

I speared a mushroom with my fork and lifted it to my mouth.

“Isn’t that Collier?” Todd said, looking over my shoulder.

I admit it: for a second, my heart skipped a beat and I almost choked. Then I realized two things: 1) he’d probably only said it to get a reaction from me—Todd was suspicious of my feelings for Rafe long before there were any feelings to speak of—and 2) there was no way he could be right.

I swallowed the mushroom and made sure my voice was steady. “I doubt it. If he were back in town, I’m sure someone would have let me know.”

And it probably wouldn’t have been Rafe. If he hadn’t stuck around when I lost the baby, and he didn’t get in touch after I was shot, he wouldn’t bother to call to tell me he was back in Nashville, either.

I had, however, become friendly with Tamara Grimaldi, homicide detective with the Nashville PD, and she knew Rafe too, and kept tabs on him through her contact in the Tennessee Bureau of Investigations. I trusted her to let me know anything important that happened. Like, if he died. Or if he’d been shot or hospitalized. Or if he’d come back to Nashville.

Todd nodded, reassured by my lack of interest, and forked up another piece of veal.

I continued my internal monologue while I chased mushrooms around my plate. Even if Rafe was back in town and nobody had bothered to tell me, he wouldn’t be here at Fidelio’s. He despises the place. I’ve had dinner with him twice, and both times he treated the fancy cuisine and snobbish waiters with irreverent amusement. He wouldn’t choose to come here unless it was with me. And since we were over and done, he had no business being here. It was probably just someone with a passing resemblance to Rafe. Todd was a little bit paranoid on the subject, so he was probably just seeing things.

“Are you sure he’s not back in Nashville?” Todd said. “Because that really looks like him. Just the kind of woman I’d expect him to be with, too.”

I twisted on my chair. “Where? I really don’t think…”

And then my breath went when I saw that yes, it was indeed Rafael Collier on the other side of the restaurant, being shown to a romantic table for two. A table I had once shared with him, as it happened. And the woman he was with was exactly the kind of woman I would expect him to be with, too.

Like Rafe, she looked like she might be of mixed race. Long, dark hair fell straight like a waterfall down her back, and she had exotic almond-shaped eyes in a stunning face with flawless caramel skin and red lacquered lips. She was shorter than me, and even in four inch heels she barely came up to his shoulder. Granted, he’s tall—six three, give or take—but she was still on the petite side. And she was poured into a short, tight, Christmas-red dress that clung to every curve she had, and his hand was right there, on the exposed skin of her back. That, more than anything else, hurt. He was touching her. In a sort of intimate way. Skin to skin. The same way he’d touched me.

I own a red dress too. I’d bought it to coax a proposal from Todd—this was when I thought being engaged to Todd would make me less likely to indulge in my feelings for Rafe—but when he actually came out and proposed, I decided I couldn’t say yes. And then I went off to find Rafe instead.

My dress isn’t as short or as tight—hers looked like lycra; mine’s satin—but it’s also backless, and I could remember disconcertingly well the feeling of his hands on my back, warm and hard and a little rough. I could remember what happened afterwards too, and the thought that they’d be leaving Fidelio’s and going home to make love in his bed—the bed where he’d made love to me—was enough to turn the Chicken Marsala to sawdust in my mouth.

And then there was the way he was looking at her. The way he used to look at me.

She’d sat down with her back to me, which left him facing our table. If he looked up to scan the restaurant, he’d see us. I had to get out of here before that happened. But first I had to tear my gaze away from the expression on his face, and it wasn’t easy.

Rafe is a good-looking man, if you happen to like the type. Tall, dark, and dangerous, like the heroes of Barbara Botticelli’s bodice rippers. Lately, he’s been growing his hair longer than usual, and while the perfectly styled espresso waves are attractive, I kind of miss his short crop. He has brown eyes, as dark and melting as those on a Jersey cow, and whenever he looks at me—unless we’re in bed together, and sometimes even then—they always hold a hint of amusement. Warm amusement, like he’s enjoying the company; not like he’s secretly laughing at me.

And tonight he was looking at her that way. Like he enjoyed her company. Like being with her made him happy. Like she was interesting and beautiful and special.