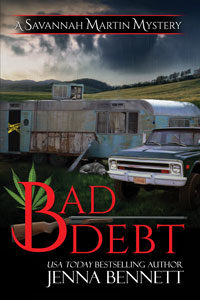 When every member of a rural Sweetwater family is murdered in their beds, Maury County sheriff Bob Satterfield calls on the Tennessee Bureau of Investigation for help. While Savannah’s husband, TBI agent Rafe Collier, heads to their shared hometown to help the sheriff figure out who and what is behind the grisly massacre, Savannah goes along to assist her old friend Yvonne McCoy’s quest to gain ownership of Beulah’s Meat’n Three restaurant.

But when Beulah Odom’s death turns out to have been murder, suddenly Yvonne’s on the hot seat. And with the sheriff occupied elsewhere and Beulah’s family gunning for Yvonne, it’s up to Savannah to figure out the truth before her old friend lands in jail… or six feet under.

The day started like any other. I woke up on my side—I was seven months pregnant, so I couldn’t sleep on my stomach anymore, and the obstetrician had made it clear that lying on my back wasn’t a good idea, either. Rafe was sleeping behind me, with a hand splayed on my stomach and his nose buried in my hair.

Or actually, he wasn’t. By the time I woke up, the hand was moving north and his lips were doing things to the area behind and a little below my ear.

“Is that a banana in your underwear,” I asked sleepily, “or are you happy to see me?”

He lifted his head long enough to tell me, “I’m always happy to be waking up next to you, darlin’,” before going back to what he was doing.

While I settled back in, Rafe got up and walked into the bathroom. I went in and out of hearing the shower and then the trickle of water in the sink as he shaved and brushed his teeth. Eventually he came out, wearing nothing but a towel, and I managed to open my eyes for long enough to enjoy the show. The towel disappeared, and I watched as he pulled on a pair of underwear and then a pair of jeans. Finally, he pulled a T-shirt down over all those muscles, and shrugged into a gray hoodie, before coming to bend over me. “I gotta go to work, darlin’.”

“Always.” He gave me a kiss and straightened. I happen to know that he’s rarely careful, but he usually makes it home, and besides, I was too tired to argue. As his footsteps faded down the stairs, I snuggled back into the pillows and went back to sleep.
The second time I woke up was maybe an hour later. The footsteps were back, coming up the stairs this time. Almost running. Heavy soles thudding on the worn wood treads.

For a second, my heart shot up into my throat. What if it wasn’t Rafe? What if it was someone else who had waited for him to leave, and who had broken in to hurt me?

But a second later he burst through the doorway—he, himself—and headed for the closet.

I pushed myself up on one elbow. “What’s wrong?”

He glanced at me over his shoulder. “Got a call.”

I sat up a little straighter, and watched as he pulled out a backpack and started shoving underwear and T-shirts into it. “From who?” Or whom?

“The sheriff.” He chose another pair of jeans—other than the pair he was wearing—and shoved them into the bag on top of the T-shirts.

We live in Davidson County, which is the same as Metropolitan Nashville. There’s a chief of police as well as a sheriff in charge of us. But I had no idea that Rafe was on speaking terms with the Davidson County sheriff. When he gets a call, it’s usually from the Metro PD, and most often from our friend, homicide detective Tamara Grimaldi.

He shook his head. “Sheriff Satterfield.”

Bob Satterfield is the sheriff of Maury County, which is located an hour to an hour and a half south of Nashville, and encompasses the city of Columbia as well as the small town of Sweetwater, where we both grew up.

In addition to that, Bob Satterfield is my mother’s gentleman friend. Once upon a time, in high school, I dated his son Todd, who is my brother Dix’s best friend.

“Does this have anything to do with Mother?”

“I don’t think so,” Rafe said, looking around.

“Toothbrush?” I suggested, and watched him hurry toward the bathroom. “What does it have to do with?”

He came back, and dropped the backpack on the foot of the bed so he could close it. “Six dead.”

You’ll pardon the question. Maury County is a sleepy sort of place. Not even Columbia has much of a crime rate, and the rest of the county is even more laid back. The last time anything like that happened down there was six months ago, in May, when my ten year high school reunion was the occasion for a killing spree. Or maybe a case of serial murder. I’m not sure about the difference. Several people died, anyway. But that was the first time anything like that had happened in years, not to say decades.

And now there were six dead?