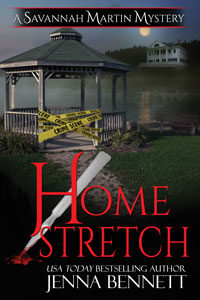 The end is near.

The end of Savannah’s pregnancy, that is. Less than a month to go, and she’ll be the mother of what will surely be the most adorable baby boy or baby girl in the world.

But before that, there’s Thanksgiving with the Martins to get through. Not to mention a little spot of murder at the group home where Mrs. Jenkins, Savannah’s grandmother-in-law, lives.

A spot of murder that leaves Mrs. Jenkins covered in blood, and with no memory of who else might have hurt night nurse Julia Poole.

With Savannah’s friend, homicide detective Tamara Grimaldi, investigating, and Savannah’s husband Rafe insisting that the detective can’t find out about Mrs. Jenkins’s involvement, in case she doesn’t share his rock-solid belief that Mrs. Jenkins would never kill anyone, Savannah’s caught between a rock and a hard place.

Can she help Mrs. Jenkins figure out the truth before Detective Grimaldi throws them both in prison… or before the real murderer comes back to finish the job?

By the middle of November, I was feeling like the Thanksgiving turkey. Stuffed. I was within a few weeks of giving birth. I couldn’t see my toes. I couldn’t see my swollen ankles, either, although that was probably a good thing. And I waddled when I walked. My back hurt. Sleeping was impossible—good training for after the baby was born, my sister told me; she’s had three, so she should know.

I couldn’t wait for it to be over.

Not because I wanted to finally meet the baby, this tiny, miraculous human who was supposed to be the perfect combination of me and my husband.

No, I just wanted to go back to having a waistline and ankles that didn’t hurt.

And the worst thing was that when it was all over and done with, I still wouldn’t fit back into my shoe wardrobe, because my arches were history and my feet looked like they belonged to Wilma Flintstone. Flat as flapjacks. I’d be lucky to fit into a pair of Birkenstocks by the time this was over.

“You’re beautiful,” my husband told me, not for the first time, as we cuddled together on the sofa the Saturday before Thanksgiving.

And by cuddling, I mean that I was sitting sideways on the sofa with my feet in his lap, and he was rubbing them.

“I’m fat.” I scowled at him across the mound of my stomach. From this vantage point, I could have sworn I was giving birth to twins. Or a baby elephant. It felt like I had gestated long enough to create one.

He kept rubbing. “You’re not fat. You’re pregnant. And beautiful.”

One hand moved past my—swollen—ankle to my calf, and massaged a little there, too. I sighed. When he moved to the back of my knee, and stroked the thin skin there, I told him, “If you want sex, it’s going to have to be doggie style. It’s the only way that works anymore.”

He grinned. “Far be it from me to turn down doggie style, darlin’, but are you sure it’s safe?”

“The doctor said we could carry on as usual until the last month,” I reminded him.

“And we’re in the last month now.”

But really, who was counting?

“I love you,” Rafe said, and smoothed a hand over my thigh. I moved my leg a little. “And I love that you can’t get enough of me.” He grinned as his hand moved north, with no complaint from me. “But are you sure this is a good idea?”

With the way he was touching me, it seemed like a very good idea. Very good.

However, I did understand his concern. And loved him more—or would have loved him more if I didn’t already love him so much it hurt—for it.

But on the other hand— “It’s almost a month until the baby comes. Or at least three weeks. Are you going to go without for three weeks?”

He looked thoughtful at that. “I’ve gone without for longer than that before, you know.”

He arched a brow. “Two years in Riverbend Penitentiary, remember?”

“Of course, but…” I flushed. “I mean, don’t things happen in prison? You hear stories…”

He chuckled. “Big Ned didn’t make me his bitch, if that’s what you’re asking.”

He shook his head. “No, darlin’. There was nobody named Big Ned. And I didn’t have sex with the other inmates. Or the female guards.”

Then again, if all the inmates looked like Rafe, I could see the temptation. But they don’t.

“Lots,” Rafe said. “But for the most part they didn’t look like anybody I’d wanna have sex with. Although there was this one woman…”

He laughed. “I’m just messing with you. I was celibate for two years, unless you consider the company of Mary Thumb and her four sisters. I think I can survive three weeks.”

“It’ll be more than that. Things have to come back together after the birth, too. You’re probably looking at two months.”

“Always.” And I probably always would. At least I didn’t see myself getting tired of him anytime soon. “And anyway, I wouldn’t cry if the baby decided to come early.”

We were at a point where it was safe. A little premature, but safe. I’d had a risky early pregnancy—it was my third, and the first two had ended in miscarriages; one a year ago, one a couple of years before that—and the doctor had told me that anything after week 36 was considered full term, so I just had to hold on until then. Although with my luck, now that I was past the danger point, the baby would probably dig in and refuse to come out, and I’d have the only 10-month baby ever born.

“It’ll be worth it,” Rafe told me as he walked his fingers lightly up my thigh.

“You don’t have to convince me.” I knew what he was capable of. It would be very worth it.