So it turns out I’ve been up above 500 adds on Goodreads for a while. I still don’t quite understand it, because on my homepage it shows 495, but the fab Jen McLaughlin showed me another place where it says 522, so I guess I owe y’all an apology. The first five pages of the book should have been leaked lo-o-o-o-ong ago.

So without further ado, here they are. Enjoy! 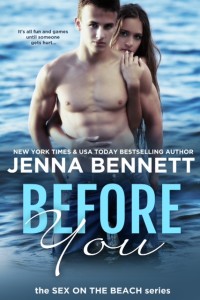 This was the life. Sun, sand, and hot guys, plus an unlimited supply of alcohol, thanks to Mackenzie Forbes, who was bound and determined that her friends have a good time.

Spring break in Key West. What could be better?

I put my half-empty glass on the bar and turned to survey the room.

It was only Sunday night. We’d been here just over twenty-four hours, and Mackenzie had already homed in on the guy she’d decided to spend the week with. He was local, not one of the college guys down for spring break. Older than us by a few years, and dressed in ripped jeans with tattoos visible under his shirt. All the things America’s Sweetheart should stay far away from, but didn’t.

Looking at Mackenzie, I was very glad I was just plain Cassie Wilder from Nowheresville, Ohio. Fame and fortune sound great on paper, but try losing your virginity with the paparazzi breathing down your neck. Try falling in love and having your relationship splattered all over the tabloids.

Try breaking up and having everyone in America weighing in on whether he cheated or you did, and how you’re coping with being dumped again.

No thanks. If Mackenzie had found a guy who wasn’t gonna sell her out to the press, more power to her.

Quinn had already left, with some Ivy League dude hot on her trail.

He’d been staring at her for an hour, from the table where he’d been sitting with his friends, and when she got up to go, he took off after her. Neither of them had come back, so either he’d talked her into going somewhere with him, or she’d made it back to the hotel in one piece and was up in her room spending quality time with her television boyfriend. With Quinn, it could be either.

That left me here by myself.

Luckily, there were still plenty of guys to choose from, and plenty of time left. Key West was stuffed to the gills this week, and I had five and a half days of vacation to go.

This was it. I was going to find a guy and join Quinn among the ranks of the devirginized.

The Ivy Leaguers didn’t appeal, though. Nor did the guys with tattoos. And I’m not that big on jocks. It didn’t leave a whole lot of options.

I turned back to my glass. But before I could reach for it, someone whisked it away. “How about I get you a fresh drink?”

It went into the hand of the bartender, who carried it away.

The guy who had spoken had green eyes and hair that straddled the line between dark blond and light brown. The streaks through the front could have been sun, or just expensive highlights. He was wearing jeans—good quality but not designer, faded but not ripped—and a navy blue T-shirt, one that said FBI in big white letters across the chest. I had to lean closer to see that below, in much smaller letters, it said Female Body Inspector.

He glanced down and up again. “Thanks. I’m Ty.”

He grinned. “Maybe later. Where d’you blow in from, Cassie?”

He shook his head. “D.C. But I’m from Florida originally.”

“I’m from Ohio,” I said. “Small town in the middle of nowhere. Lots of cornfields and cows. Chicago’s a lot more exciting.”

“Sounds like.” He folded his arms on the bar. Nice arms. Nice smile. Good teeth and a dimple. “So how long have you been in Key West?”

I told him we’d flown down the day before and arrived in the afternoon. “We’ve been here about,” I checked my watch, “thirty-two hours.”

“You come down with friends?”

I nodded. “There are three of us. Mackenzie is over there in the corner. Quinn already left.”

His brows lowered at that. “Alone?”

“She had some guy following her. Part of that group over there.” I pointed to where some of Ivy League Dude’s friends—just as Ivy League, Abercrombie and Fitch all the way—were still hanging out, knocking back shots of tequila like there was no tomorrow.

Ty watched for a second and then turned back to me. “How long ago did they leave?”

He shrugged. “No reason. There’s a lot of people in town this week. Safer not to go off alone.”

He tilted his head, and a hank of blond hair fell across his forehead. “But she doesn’t know Ivy League Dude, does she?”

Dammit, was he just talking to me as an excuse to find out about Quinn? I mean, I know she’s pretty and all, but I’m not that bad. Am I?

“I’ll show you mine if you’ll show me yours.”

“Room key, credit card, license.” I pushed the license toward him.

He picked it up. “Nice picture.”

Not so much. Official photographs are rarely that good. And I’d had a zit on my chin that day. Although the picture was so small it didn’t matter too much, I supposed.

I looked at his. Tyler Jackson McKenna, with an address in Washington, D.C. Born a year before me. Probably about to graduate, unless he’d skipped a year somewhere, or was taking things slowly.

The picture matched. It was definitely him.

I handed it back. “Thanks.”

“No problem.” He put it back in his wallet, and the wallet back in his pocket, before nudging my room card, with the hotel logo prominently displayed. “This where you’re staying?”

“Mackenzie is paying,” I said, my tongue a little looser than usual from the drinks. Not that I was drunk or anything, just a little tipsy. “Quinn and I wouldn’t be able to afford it on our own.”

Going to Key West for spring break had been a last-minute decision. All the cheap places had been sold out. Quinn and I had talked about sharing, to cut costs, but Mackenzie had put her foot down on that idea. If we had any hope of getting laid, she told us, we needed separate rooms.

“You go to school with her?”

Yes, I did. Mackenzie had become a country music star at sixteen, and by the time eighteen rolled around, she was ready for some peace and quiet out of the public eye. So she’d enrolled at the University of Chicago, just like a normal person. We’d bonded in English 101 and been close ever since.

Yes, she could. She’d just finished up her new album over Christmas break, and now she was in the process of finalizing her summer tour schedule. All she had to do to recoup the cost of Quinn’s and my rooms, was sell a handful of extra tickets to one of her concerts.

That didn’t mean I wasn’t grateful, of course. She was going above and beyond the call of friendship. After all, she could have gone to Key West by herself. She didn’t have to bring Quinn and me along.

“And I guess it makes sense that she’d want somewhere with good security,” Ty added.

I hadn’t thought about that, but yes. Sure. She’d told us stories about some of the more persistent of her fans, and I didn’t blame her at all for wanting to feel safe. If someone was willing to break and enter to get his hands on my underwear, I’d want good security, too.