the beauteousness of DIY-4, Mortar and Murder! 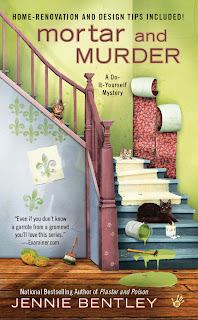 Due to arrive in a store near you on January 4th, 2011 – that’s just over six months from now – Mortar and Murder has a cover, and as usual, the brilliant Jennifer Taylor has outdone herself. My sinister shadow is back, which makes me very happy – he was missing from DIY-3, Plaster and Poison – and you’ll notice a new cat up there in the middle of the stairs. He’s a small Russian Gray kitten named Mischa, and he lives under the porch of the 1783 center-chimney Colonial house on Rowanberry Island that Avery and Derek take on in Mortar and Murder. I wanted the book to be called Island Getaway, which should give you an idea of what it’s about, but that was deemed not renovate-y enough. So we ended up with the current title instead. And the current cover. Innit beautiful?
Scroll Up