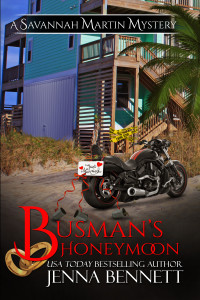 It’s official. Margaret Anne Martin’s perfect daughter Savannah has tied the knot with her unsuitable boyfriend Rafe Collier, and they’re off on their honeymoon to sunny Florida, courtesy of Savannah’s brother Dix and sister Catherine.

However, the happy couple barely has time to enjoy a night of nuptial bliss before they find themselves face to face with the dead body of their hostess, Frenetta Wallin, the next morning. And as soon as the local sheriff’s deputy finds out about Rafe’s criminal record, Savannah’s new husband becomes suspect Numero Uno in what might not have been a natural death.

So much for a romantic honeymoon full of sun, sand, and hot sex.

Instead, Savannah must ferret out the truth about who wanted Frenetta dead, and why, before the sheriff can slap handcuffs on Rafe and slam the cell door behind him.

“Do you,” the minister asked me, “Savannah Jane, take Rafael to be your lawful wedded husband, to live together in marriage? Do you promise to love him, comfort him, honor and keep him for better or worse, for richer or poorer, in sickness and health, and forsaking all others, be faithful only to him so long as you both shall live?”

He paused so I could respond. I opened my mouth, but nothing came out.

It wasn’t that I didn’t want to marry Rafe. Quite the contrary. I wanted to, desperately.

But what if I failed? My first marriage had ended in divorce. I hadn’t made Bradley happy. I hadn’t loved him enough, or comforted or honored or kept him well enough. What if I couldn’t keep Rafe happy, either?

I loved him so much it hurt. I wanted nothing more than to keep him for as long as I lived. But what if I lacked the wife-gene? We’d been doing well living in sin for the past six months. What if once we were married, things changed? What if getting married jinxed the lovely relationship we were building?

Rafe arched a brow, and behind me on the first row, my mother cleared her throat. There was a soft rustling going through the tent, as of a gentle breeze moving through dry grass. It was the sound of people starting to whisper.

Mother was probably hoping I’d say no. She’d allowed us to get married here, on the grounds of the Martin Mansion, my ancestral home, in Sweetwater, Tennessee; an hour and a little more south of Nashville. She had even suggested it, and had arranged the occasion with her own hands, from the catered food to the dress I was wearing to the white gardenia in Rafe’s lapel. But I don’t think she’d have minded terribly if I’d changed my mind halfway through the ceremony.

The minister cleared his throat. He looked from me to Rafe and back. “Is there a problem?”

For a second, his gaze dropped to my stomach, round under the off-white silk and chiffon.

He probably thought we had to get married, as the euphemism goes. I was pregnant, visibly so. Maybe he thought I didn’t really want to marry Rafe, and that I only did it because I didn’t want to be a single mother.

And nothing could be further from the truth.

“I do.” I looked at Rafe. “I want to be your wife. And I’ll love you and keep you and be faithful to you for the rest of my life.”

A corner of his mouth turned up, and his eyes warmed.

The minister turned to him. “And do you, Rafael, take Savannah to be your wedded wife, to live together in marriage?”

It might have been my imagination, but I could have sworn his voice had turned doubtful, as if he expected the answer to be no.

“Do you promise to love her, comfort her, honor and keep her for better or worse, for richer or poorer, in sickness and health, and forsaking all others, be faithful only to her so long as you both shall live?”

There was a pause. I imagined my mother holding her breath, and probably crossing her fingers.

“Thank you.” The minister sounded annoyed. “Do you have the rings?”