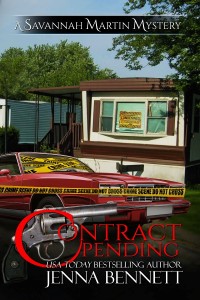 Excerpt – from somewhere in Chapter 4 or so…

For just a second—less; half a second, maybe—my heart stuttered in my chest at the sight of the man leaning on the car. Tall, dark, muscular… One arm braced above the passenger side window and dark head inclined toward Mrs. J, he was dressed in faded jeans that molded long legs and a nice posterior, while a plain white T-shirt stretched across broad shoulders and well-developed arms.

My breath caught in my throat, my stomach swooped… and then I realized that it wasn’t Rafe after all. Just another tall, dark, muscular guy in faded jeans and a T-shirt. One who was bugging Mrs. Jenkins.

“Excuse me!” I raised my voice and sped up, my heels clicking against the pavement. “Sir!”

The man straightened and turned. Up close and from the front, he looked less like Rafe. The coloring was the same—dark hair and eyes, golden skin—but this guy’s hair was longer than Rafe’s, straight and shiny, slicked back. Rafe keeps his hair cropped short. The man had a trim goatee, while Rafe stays clean-shaven, and he had an earring, a small silver cross, that Rafe doesn’t have. He also had some sort of tattoo—a dragon or demon, maybe; something green and scaly—that extended a claw above the neck of the T-shirt in the back, and around the side of his throat. And though the eyes were the same—brown bordering on black, deep and dark, fringed with long, sooty lashes any woman would sell her soul for—the expression in them was different. Where Rafe rarely looks at me without some form of amusement, even when he’s about to kiss me and his gaze is hot enough to scorch, this guy’s eyes were flat and expressionless.

“Can I help you?” I came to a stop in front of him. He was a little shorter than Rafe, too. Just an inch or so over six feet tall.

He looked me over. From head to toe and back. If it had been Rafe, the inspection would have been slow, insolent, appreciative, and ending in a killer grin. It would have made my cheeks flush and my stomach quiver. This appraisal made a chill go down my spine. There was no feeling there. No appreciation, no curiosity, no anger—nothing but cold assessment.

I forced myself not to show a reaction. “Sir?”

“I’m looking for Rafe.” His voice was low, harsh, with a hint of an accent. Not Southern. That was different, too. Rafe’s voice is husky and warm. Only when he’s angry do his voice and eyes go dead and flat, like this man’s.

“That’s quite a coincidence,” I said. “So am I. I’m sure Mrs. Jenkins told you we haven’t seen him for more than a month?”

I leaned sideways, to try to get a bead on Mrs. J, in the front seat of the Volvo. Just to make sure she was OK and still breathing. The way this guy was looking at me, I wouldn’t put it past him to have slit Mrs. Jenkins’s throat if he didn’t get the answers he wanted.

She was still alive. Staring straight ahead, her wrinkled face blank. I recognized the expression, or rather, the lack thereof. Clearly, whatever the guy had said or done to her, had scared her practically witless. She’d retreated into this place she goes, where she isn’t living in the same world as the rest of us anymore. She gets a vacant look in her eyes, and she babbles. About old Jim Collier shooting her son Tyrell, about Walker Lamont cutting Brenda Puckett’s throat, about Walker coming after the two of us with a gun… The poor dear has had some tough breaks in her life, and obviously, being related to Rafe isn’t destined to make anything easier for her.

I added, pulling my attention back to the man in front of me, “He left almost six weeks ago. He mentioned Memphis, although that could have been just a ruse. No one’s heard from him since. For all I know, he’s dead.”

The man parted his lips, just far enough to squeeze out a few words. “He ain’t dead.” The unspoken last word of that sentence, I thought, was yet.