I imagine some of you might have missed this when it was a guest blog elsewhere last month, so I thought I’d repost it in honor of Doomsday. This is Isaac Miller’s first meeting with the rest of the crew from the Good Fortune, one Black Friday two years before the events of Fortune’s Hero.

It was a nightmare, pure and simple: worse than any combat situation he’d ever found himself involved in.
His very own version of hell on Earth.
And he wasn’t even on Earth.
Sweat trickled down his back inside the shirt and jacket, and his hand twitched toward the laser pistol strapped to this hip, and twitched away again. Much as he wanted to, he couldn’t justify blasting his way through this crowd.
It was the biggest shopping day of the year, and the Sky Mall was filled to bursting. All fourteen levels, stuffed full of women and children. Squealing children, crying children, whining children; their shrill screams and maniacal laughter assaulting his eardrums like tiny sonic grenades, sending chills down his spine.
And then there were the women: chattering, laughing, and giggling like hyenas. Their comm links chirped incessantly, and their gel soles squished when they walked.
Noise everywhere, people everywhere, and he couldn’t shoot any of’em.
Christ, he never woulda guessed he’d ever wish himself back into that box where he’d spent all his time recently, but it had been quiet in solitary confinement. Blessedly quiet.
Gritting his teeth, he plunged into the maelstrom of bodies and fought his way toward the lift tube, doing his best not to step on any children or get tangled in the strings of the tiny flying reindeer some of them towed. 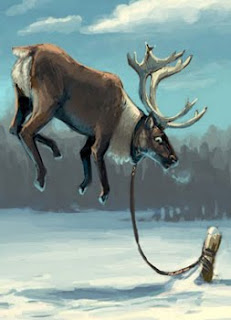