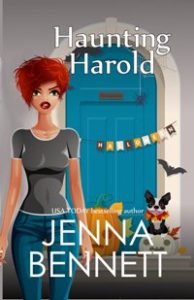 As Halloween approaches, Fidelity Investigations PI Gina Beaufort Kelly takes on the task of surveilling Harold Newsome, one of her late husband’s clients. Harold’s third wife Heidi thinks something’s going on, and she wants Gina to discover what.

It soon becomes clear that Gina isn’t the only one haunting Harold. Another local PI is also on the trail, and then there’s the young blonde who often shows up where Harold is.

But when another seemingly simple case of philandering turns to murder, Detective Jaime Mendoza gets involved. And as it turns out, this might not be the first time murder has struck the Newsomes… 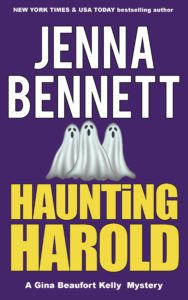 me walked into my office like she owned it, trailing a fur coat that had probably cost almost as much as the building, and dripping with diamonds. The rock on her finger could have fed a small, third-world country for a year.

She was the wife of one of my late husband’s clients. On that fateful evening two months ago, when David had plowed his car into a median on I-440 south of Nashville and became my late husband just in time to avoid becoming my ex, he’d been on his way home from a dinner party he had attended with his new girlfriend, his business partner, and a couple of clients. Harold and Heidi Newsome had been among them.

After David’s death—since we’d still been married when he crashed—I inherited a third of his fortune. I’d also inherited the location of the business David ran with his partner Farley: this little one-story building on Music Row in Nashville, built sometime in the nineteen-fifties, that hadn’t been updated since. The walls in the reception area were knotty pine, hung with signed photographs of some of the country music greats, like Patsy Cline, Hank Williams Senior, and Johnny Cash. All of whom—except Johnny—had died while David and Farley were in diapers, but the photos gave the impression of business longevity and celebrity clients. When I took over the building and turned it into the headquarters for Fidelity Investigations, the PI firm I had established so I could continue to follow cheating husbands around, I kept things the way they were.

Heidi clearly wasn’t impressed. And it was hard to blame her. The place looked like it had been here forever, and hadn’t been updated since. But that was the point. Longevity and celebrity clients.

There were four of us in the lobby when Heidi walked in. My name is Gina Beaufort Kelly, and I’m David’s widow. My business partner Rachel was David’s administrative assistant before he died. Now she’s mine, as penance for not telling me about Jackie-with-a-q—David’s mistress—as soon as she found out that he was cheating on me.

Zachary is our only employee. Young, cute, and freckled, he’s passing time with us until he’s old enough to apply to the police academy, which is what he really wants. At the moment, his eyes were bugging out of his skull as he took in the splendor—and sex appeal—that was Heidi Newsome.

The final member of the team also had eyes that bugged out of her skull. She was curled up on the sofa between me and Zachary, rumbling low in her throat.

Heidi was still looking at Edwina. “What’s that?”

Heidi’s perfectly plucked brows arched, but she didn’t speak. Instead she took another look around the room. “I thought this was supposed to be an open house.”

It was supposed to be an open house. At least that’s the way Rachel and I had conceived it when we’d sent out the invitations last week. They’d gone to the wives of all of David’s old clients. Women like me, trophy-wives married to older men who were probably looking, or would soon be looking, to replace them with newer models.

Until Heidi showed up, we’d been sitting here enjoying the wine and canapés by ourselves.

She looked at me.

“Wine?” I lifted the bottle.