The other day I had a question on my Facebook page from Patti St Marie Wilson, one of the fans of my alter ego, Jennie Bentley’s Do It Yourself home renovation series:

Who do you think of when you write about Derek? I figured the name came from Derek Morgan – but, your Derek is blond. I’m trying to think of a blond hunk and none seem to come to mind. lol 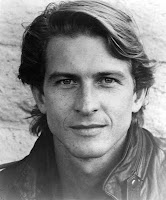 The truth is, I don’t think about anyone. But since Patti wanted to know what Derek Ellis looked like, I had to do a little bit of figuring, and here’s what I came up with:
This guy’s name is Brett Cullen. Not one of the vampire Cullens, although he’s certainly beautiful enough, don’t you agree?
Yes, this is close to what my Derek – Avery’s Derek – looks like. When I started writing the series, I didn’t have this guy in mind, though. In the original outline my editor sent me, the character’s name was Mike Ellis, and he was supposed to look like Bill Pullman.

However, I happen to be married to a Mike, so making him the hero of my new mystery series seemed a little self indulgent, and much as I enjoy Bill Pullman as an actor, he doesn’t make my heart beat faster. So I had to do a bit of tweaking.

I don’t know where I came up with the name Derek; I think I just picked it out of the air. It wasn’t because of Derek Morgan, because I didn’t watch Criminal Minds then. It’s possible I picked it because of Derek Jeter, but I’m not sure. It’s a nice name. I kept the character blond because I was already writing the Cutthroat Business mysteries about Rafe, who definitely isn’t blond, and I wanted to do something different.

(On a side note, I originally thought Rafe would look something like Derek Jeter. It turned out he didn’t. But that’s a blog for another time.)

Brett Cullen and I go way back, though. Just because I didn’t consciously picture him when I created Derek Ellis, I have to think he was in the backbrain somewhere. See, Brett Cullen used to be on what was – and possibly still is – my very favorite TV show EVER.

It was called The Young Riders and followed a group of people at a Pony Express waystation in Nebraska Territory in 1860. The series ran from 1989 to 1992, and it spawned my #1 celebrity crush, one I still haven’t quite been able to shake, 20+ years later.

No, it wasn’t on Brett Cullen. Sure, he was hot, but I was young back then, and I was crushing on the boys instead of the men. Brett Cullen played Marshal Sam Cain, who happened to have a thing for Emma Shannon, who ran the waystation.

For your enjoyment, here’s a little snippet from the first episode of the show, in which Brett AKA Sam, probably had the best line of the entire episode. Enjoy!

3 thoughts on “Hunk of the Week: Cullen (no, not the vampire one)”