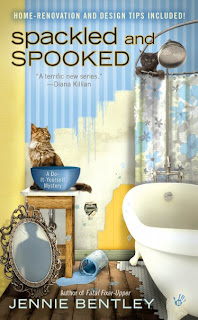 Q–How does Avery Baker grow or change in this sequel from the debut book Fatal fixer-upper?

A–Avery is still Avery, you know. A little neurotic and insecure, a little too worried about her boyfriend’s perfect ex-wife, and still adjusting to life in a small town in Maine after spending her life so far in New York City. But she has gained some confidence as a renovator since tackling her aunt’s house, and she has realized that some of her wilder ideas may not always be the way to go. I think she’s a little mellower now, not as determined to prove herself or as inclined to see everything that happens as a threat to her identity. As her relationship with Derek develops and deepens, she becomes more sure of herself, of who she is and what she wants from her life. She’s growing up a little, and settling more comfortably into her new life.

Q–Did you know how Spackled and Spooked would end before you started writing it?

A–When we’re talking about traditional mysteries, they pretty much always end the same way. The sleuth, in this case Avery, figures out who the bad guy is, why he did what he did, and then the police show up and arrest him. Or her. I knew from the beginning who the murderer was and why he killed his first victim. I didn’t know until I got to the end of the book how Avery would figure things out or how the final confrontation would take place. That all develops as I write. But I usually have at least a pretty good idea where I want to end up before I start, as it’s hard to get to where you’re going unless you know where that is.

Q–Because of your background of fixing up homes, did you know the details of the home repairs outlined in this book?

A–I’ve renovated my share of bathrooms over the years, yeah. (That’s the project in this book. In Fatal fixer-upper, all the projects were kitchen related; in Spackled and Spooked, they deal with bathrooms. In the next book, which comes in May 2010, we’re talking romantic bedroom.)

I tend not to do my own plumbing or electrical work—there’s too much scope for disaster there, and good reasons why plumbers and electricians are supposed to be licensed—but as far as the cosmetics go, I’ve been there and done that. We’ve got directions for a few different paint techniques, brown-paper-bagging walls, installing a vessel sink—or, Avery being Avery, a salad bowl—and turning a piece of furniture, in this case a chest of drawers, into a sink base.

Q–Since you’ve been writing the series, what have been some of the varying comments you’ve received about this DYI/Home Renovation mystery genre?

A–Most people I hear from write to tell me they enjoyed the book. Since I don’t really hear from the people who don’t, it’s all been good.

Home renovation is such a big thing right now, that the books seem to resonate with a lot of people. One of the comments that stuck with me, was someone who told me that while she’s addicted to HGTV—just the target audience my publisher was looking for!—she appreciates the way the projects in my books relate to real people. Most folks don’t have several square miles of granite in their kitchen, or an extra $20,000 to drop into a bathroom renovation, and the fact that the tips in my books are designed for real people, and that Avery and Derek do their fixing up on a normal, and if possible frugal, budget, gives the books broad appeal.

Oh yes, and then someone e-mailed me to say that my book reminded them of the early writings of Elizabeth Peters, my all-time favorite author, which just totally made my day!

Q–How long did it take you to write Spackled and Spooked?

A–Spackled and Spooked wrote itself, pretty much. Seriously, it was a very easy book to write. I guess the first draft took 2-3 months, and then another couple of months to revise, get feedback, and revise again. And then I had to do another round of revisions six months later, after my editor had a chance to read the manuscript and send me her thoughts. That’s the usual time it takes me to write a book. Start to finish in under six months, and then another year after that for the publisher to get the cover art and type setting and various incarnations of proof editing done.