Yep, you read it right. The big day is finally here, five days late, and I couldn’t be more excited. 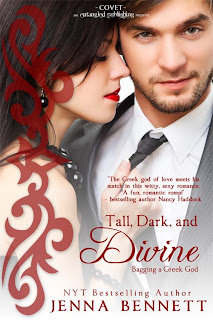 Just look at that cover! Isn’t it the most gorgeous thing you’ve ever seen? The colors? The “NY Times Bestselling Author” bit? 🙂 And check out the look on his face. Did you ever see such a come-hither look in your life?

Here’s what’s known as the back cover copy… or – since ebooks don’t really have covers – the blurb AKA teaser:

Eros, the Greek god of love, swore off the useless emotion after his ex ran off with some Viking godling. He’s lost all interest in his matchmaking business, Made in Heaven, until he spots the sweet baker who works across the street. Before she stirs his sullen heart, he’ll match her and get back to his ambrosia-laced wine in no time.

Lonely baker Annie Landon has given up on finding Mr. Right. What she needs is Mr. Right Here, Right Now, and this so-called “Greek God” she’s heard is on the rebound sounds exactly like the perfect kind of distraction. But picking up the bitter, workaholic is easier said than done…especially when he seems unreasonably determined to match her with someone else.

Can a woman looking for love—and the matchmaking god who wants her to find it with someone else—have a shot at a happy ending? May the best god—or mortal—win.

Wanna tiny taste of the book? Here you go; the beginning of chapter 1:

Thunder boomed and lightning crackled across the sky. There was a moment of breathless silence, as if creation was gathering itself, and then the deluge started. Fat drops of rain hit the pavement like tiny bombs and exploded, and in a matter of seconds, the gutters ran high with water. The humans on their way home from work huddled under umbrellas and folded-up newspapers as they scurried past the windows of Made in Heaven matchmaking service, while Eros watched, grimly amused.
The god of love rather enjoyed seeing the mortals in his charge struggle with life’s little inconveniences.
He hadn’t always. Once upon a time, he’d been full of the milk of human kindness and had wanted nothing but good for everyone. Especially the mortals—poor, pitiful creatures with their weak bodies and finite lives. They deserved what little happiness they could grasp in the short time allotted to them.
But that was before the love of his life, beautiful Psyche, had called him a workaholic and run off with some overdeveloped Viking warrior with braids and more brawn than brains. Some Norse godling without a thought in his head except fighting all day and fucking all night and then getting up to do it all over again the next morning.
Ungrateful wench. And after everything Eros had done for her, too.
He lifted the bottle of ambrosia-laced wine and took a deep swallow as he watched a tall young man under an oversized umbrella hurry past the window.
Well, it was the last time he made that mistake, anyway. Never again would he get emotionally involved with a human. It just wasn’t worth the trouble.
You spent years of time and effort pursuing them. You let work fall by the wayside, so people and animals didn’t fall in love, mate, or marry, while the earth grew dry underfoot. You braved the underworld for them, you woke them from infernal sleep when they stupidly opened the box they were explicitly told not to open, and you lowered yourself and went crawling to mighty Zeus himself to ask for help in making them immortal, just so you could keep them with you forever. And then, after just a few thousand years, this was how they repaid you. By whining you worked too much and didn’t love them enough before they left you for someone else.
Mortals. Couldn’t live with them. Couldn’t—unfortunately—live without them.
Just in the event that you’d like someone else’s opinion but mine, here’s what Molly Harper, paranormal/urban fantasy and snarky contemporary romance author with Pocket, had to say about Tall, Dark and Divine:
“This is a story that has it all – humor, heart, and hotness! Annie is a heroine readers won’t be able to let go. And Eros is just handsome and stubborn enough that you’re not sure whether to kiss him or smack him. Clever integration of mythology into modern culture. An antagonist you’ll love to hate. Steamy-hot love scenes. I skipped meals and sleep to finish this book!”
If that sounds like something you’d enjoy, go forth and buy. Tall, Dark and Divine is available for $2.99 on Amazon and BN.com