Everyone has warned new-minted realtor Savannah Martin that real estate is a cutthroat business. But Savannah doesn’t think she’s supposed to take the warning literally … until an early morning phone call sends her to an empty house on the ‘bad’ side of town, where she finds herself standing over the butchered body of a competitor, face to face with the boy her mother always warned her about.

Now Savannah must figure out who killed real estate queen Brenda Puckett, make a success of her new career, and avoid getting killed—or kissed—by Rafe, all before the money in her savings account runs out and she has to go back to selling make-up at the mall.
A Cutthroat Business is free on Amazon, Smashwords and iTunes at the moment. Can’t beat that!

Here you go; from Chapter 1: 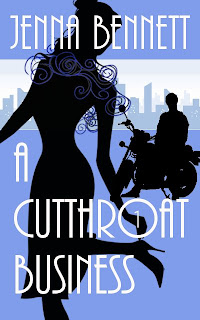 It took me four minutes longer than the fifteen I had promised before I could pull my pale-blue Volvo — the safest car on the road — to a stop behind the sleek, black Harley-Davidson waiting in the circular driveway. The man straddling the seat matched the motorcycle: dark, muscular, and more than a little dangerous. The T-shirt might as well have been painted on for all that it left to the imagination, and the tattoo peeking from under the left sleeve looked like the tail end of a viper curled around his bicep.
I hesitated before I opened the car door. Real estate can be a scary business on occasion. Those of us who are involved in it advertise our faces and phone numbers all over town, then agree to meet total strangers who call, claiming to want to see an empty house somewhere. Often in an area that isn’t the best, like the one I found myself in now. Sometimes — rarely, but it happens — one of us gets attacked. And there was something about this man that suggested that I ought to step carefully. So I did, both because it seemed prudent and because the gravel was difficult to navigate on three inch heels. “Sorry I’m late. I’m Martin…”
And then I stopped — dead, if you’ll pardon the pun — when he removed the mirrored sunglasses and I met his eyes.
They were as dark as those on a cow, and surrounded by long, thick, curving eyelashes. There’s nothing wrong with my lashes — nothing a liberal application of make-up can’t correct, at any rate — but I would have sold my soul to possess his. He could hawk mascara for Maybelline with those lashes. Not that that was the reason I was staring.
“Struck speechless by my good looks, darlin’?” His voice was amused.
“Sorry,” I managed, fighting back a blush. How mortifying, to be caught staring! “For a second there you looked familiar, but…”
“You ain’t never forgotten me?” He grinned. White teeth flashed against golden skin, and a ghostly memory stirred, like an alligator in a swamp, but it subsided without breaking the surface.
“Um…” I said, distracted. The grin widened wickedly.
When a few seconds passed while I didn’t say anything else, he added, “Been back to Sweetwater lately?”
So he was from back home. Well, it made sense. The drawl, slow as molasses, was pure South, and he wasn’t someone I had met recently, or I would have remembered.
“A few weeks ago,” I said slowly, running mental mug shots past my inner eye. “You?”
“That’d be telling.” Another grin curved his lips and the alligator stirred again. I concentrated, and almost had it, but just as I was about to reach out and grasp it, it slipped through my fingers once more.
“You couldn’t give me a hint, could you?”
I smiled hopefully. He contemplated me in silence for a few seconds before he said accommodatingly, “Sure. High.”
I nodded. Of course. He was someone I had gone to high school with. That explained it. Long enough ago that I wouldn’t necessarily remember him right off; not so long ago that I had forgotten entirely. But there had been hundreds of students in my high school, from all over and beyond. How in the world did he expect me to recognize him after all this time…?
And then the brick dropped, or the alligator reared, or whatever. I jumped back. “Oh, my God! Rafael Collier. You’re…”
“Guilty as charged.” He made a little mocking half-bow. His voice was pleasant, but his eyes were anything but. They had turned as black as the motorcycle he’d been riding, and approximately twice as hard. I swallowed and opened my mouth. And put my foot in it.
“I thought you went to prison.”
He lifted an eyebrow. Just one; the other didn’t move so much as a fraction of an inch. “That was twelve years ago, darlin’. I got out.”
Obviously. I swallowed again and took another step back.
***
﻿
Scroll Up