The print and digital versions of Fortune’s Hero are now available for purchase online and – hopefully – in a store near you, and for the occasion, here is a teaser you won’t find anywhere else on the internet. It’s from somewhere in chapter 3 or 4, IIRC.

Quinn wrenched himself out of the memory, grimacing, just in time to see the Rhenian med tech drop the gray dress on the ground. There was no red lace here; she wore simple white synthetics under her clothes; what Josie used to call granny-wear. 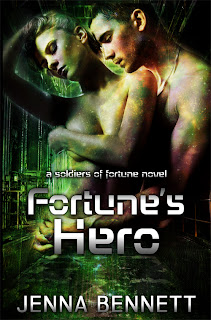 He made sure his grin was as offensive as he could make it when he addressed her. “Keep going, sweetheart. It all has to come off. Every stitch. Even the shoes. And toss those over here while you’re at it.”
He used the pistol to point to the lab coat and dress on the ground.
Her eyes flew to his, and he could see the consternation in their depths. Maybe the tracker was in the pocket of the coat. Or somewhere in that sorry excuse for a dress. If so, he could make her stop now. Save them both from this uncomfortable parody of a striptease that neither of them enjoyed.
He lowered the pistol to his lap. “Tell you what. You tell me where the tracker is, and I won’t make you take off any more. Just give it to me, and you can put your clothes back on.”
Her gaze flickered. Surprise? Or fear?
For a second, he thought it might be easy. Then—
“There is no tracker.” The med tech’s voice was low, and those green eyes he’d thought were devoid of feeling, were filled with resignation. Quinn felt himself waver—just give her her damn clothes back and let her get dressed again!—but then he hardened his resolve. He’d been fooled before; that’s what had gotten him into this fix in the first place. You just couldn’t trust a woman, especially a beautiful one.
“Guess you’ll just have to take off the rest then, sweetheart. And toss’em to me as you go. Starting with those.”
She hesitated before bending to pick up the lab coat and gray dress lying on the ground. Then she hesitated again, holding them.
“Coat first.”
She threw it from a few feet away, and it landed in a puddle at his feet. Quinn picked it up, noticing in passing the stiffness of the sleeve, where the guard’s blood had dried during their walk. There was a corresponding stain on her forearm, bright against the pale skin. The coat had shiny metal buttons, and he’d have to smash each one of those to make sure something small wasn’t hidden inside. There was also a patch of some sort sewn to the breast pocket, that he’d have to investigate further.
“Now the dress.”
She didn’t want to give it to him, that much was clear. She was clutching it, but not—he thought—to cover herself. There wasn’t anything to cover. The underpants left everything to the imagination, while the top—a camisole?—covered her from hips to shoulders.
He laced his voice with amused contempt. “C’mon, sweetheart. You’re making it harder than it has to be. Ain’t like I’m enjoying the show, you know.”
Her hands fumbled with the gray fabric. A moment later, the dress came flying at his face.
He got his hand up in time to bat it away, at the same time as he braced himself for the expected attack.
When it didn’t come, he focused his eyes on her again, and saw why. She hadn’t moved from her place on the dusty ground, but now she was clutching a knife, one she must have had in the pocket of the gray dress.
No wonder she hadn’t wanted to let go of it.
* * *
There you have it. A tiny tidbit of Fortune’s Hero. The book is available through Amazon and BN right now, at a slight discount off the sales price of $5.99. Amazon had it at $4.99 the last time I looked, and BN at $5.09. The print version, at least on Amazon, is $9.19; 39% off the cover price of $14.99. And the print book is gorgeous! Either way, not a bad deal for 95,000 words of action-adventure and romance in a galaxy far, far away.
Scroll Up