I wrote this for my friend Jamie Lee Scott’s blog; and figured I might as well cross post it over here.

Behold, the story of my first query letter and my first rejection. Enjoy! I started writing back in the dark ages of 1998.
Actually, that’s not technically true. I wrote before that too, but I wrote in Norwegian. I even completed a couple of manuscripts – YA mysteries with a bit of paranormal shenanigans thrown in for good measure, that I could never figure out what to do with after they were written. They’re still taking up space in a cabinet somewhere in my house. But in 1998, my husband suggested that if I wanted to get serious about writing, maybe I should try writing in English. I lived in the , the only books I read anymore were in the English language – it was a lot harder to get foreign books back then, before online bookstores – and I both thought and dreamed in English. English had, for all intents and purposes, become my first language.
So I started writing in English.
The first thing I wrote was chapter of a book called A Fine Romance. It was intended to become a category romance, one of those thin, inexpensive paperbacks you find at the grocery story. And I wrote the chapter for the express purpose of entering it into the Music City Romance Writers’ first annual Melody of Love contest. It’s so long ago now it’s not even listed on their website. There, they list 1999 as their first year. However, there was a contest in 1998 too, and I can prove it. I won the contemporary category with that chapter, and I have the certificate to prove it.
See? 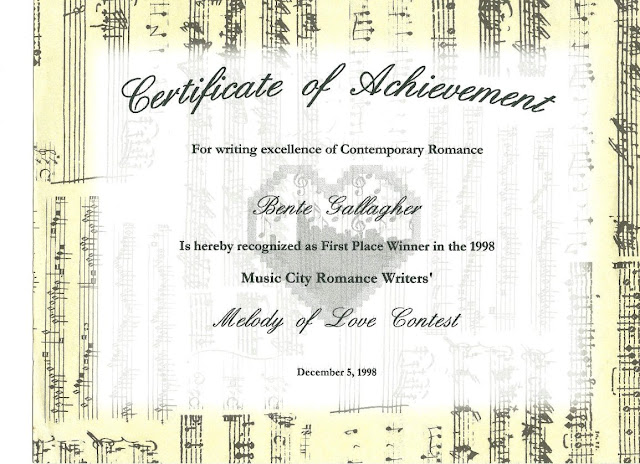 My first kid was born a few months later, in the spring of 1999, and for a while after that, anything resembling romance flew out of my life, both on paper and elsewhere. When I went back to writing, after my second kid, born in 2003, started sleeping through the night, I was writing murder mysteries. I’m not claiming that there’s a correlation, but I think the coincidence should be noted.
Anyway, sometime during that time when I was knee-deep in diapers with no time to write, I came up with the idea to try to sell that book I never wrote to Harlequin. (This is one of those cases of do as I say, not as I do. You don’t EVER want to offer someone a book you haven’t written. Especially if it’s your first one. They’re gonna wanna see it, and you’re gonna wanna have it written and edited and ready to go. Just saying.)
But I did what I told you not to do, and sent my query letter and my synopsis to Harlequin, thinking that if they were interested, I could always crank out a halfway decent manuscript in a month or six weeks. And as I richly deserved, a rejection letter followed a few weeks later.
Thank you very much for submitting your query letter regarding A Fine Romance. We’ve had opportunity to read your proposal, but we regret that the story doesn’t work for us.
I was devastated, of course. So much so that I never looked at the manuscript again. And that page and half of information about everything that was wrong with my proposal, and suggestions for how I could fix it, was wasted time on the editor’s part. (Sorry, Kathryn Lye. If you’re out there somewhere, reading this, I didn’t know any better.)
The thing is, I’ve learned a little bit since then. Namely, that when someone sends you a two page rejection letter telling you everything that’s wrong with your submission and giving you detailed instructions for how to fix it, that’s not really a rejection at all. That’s more of a door left cracked; a “do this and then get back in touch with me.”
But of course I didn’t know that then. If I had, I might have gotten published in 2002 instead of 2008. Six more years I could have spent earning royalties.
So let that be a lesson to you.
The moral of the story? Make sure you know what you’re doing before you get involved in something. If you want to play with the big boys, be sure you understand their language.
So what about you? Have any good rejection stories to share? Can you beat the sheer stupidity of mine?