Welcome, boys and girls, to another round of The Next Big Thing, this one courtesy of the fabulous Lexi George. If you haven’t read the fabulous Lexi’s books – starting with Demon Hunting in Dixie – you must. And just to whet your appetite, here’s the fabulous Lexi herself, reading the Weenie scene, at the Olde City, New Blood conference in St. Augustine in February.

And now, onto the Next Big Thing, which brings it back to me and my latest book.
1) What is the working title of your next book?
Change of Heart. It’s the 6th book in the Savannah Martin mystery series, about a recovering Southern Belle realtor in Nashville, Tennessee, and the trouble she gets up to in love and in life.
2) Where did the idea come from for the book?
It’s the 6th book in a series, so I’m always looking for plot ideas that might fit what I’ve already got going. The inciting incident – the incident that kicks off the action, namely Rafe sneaking out of bed at 6 AM – was just the next logical progression in the relationship, and then it became about what else might happen when Savannah was up and out earlier than usual. Catching Tim Briggs rinsing blood off his hands in the office sink became the next thing that happened, and it went from there.
3) What genre does your book fall under?
It’s a romantic mystery with an amateur female sleuth.
4) What actors would you choose to play the part of your characters in a movie rendition?

British-Nigerian actor O.T. Fagbenle looks a lot like I imagine Rafe in my head. Boris Kodjoe and Shemar Moore would be OK too, although they’re both getting too old. And Savannah looks sort of like Faith Hill: a pretty and sexy girl-next-door type.

5) What is the one-sentence synopsis of your book?

It doesn’t really have one. Or maybe I should say that I haven’t taken the time to come up with one. The tagline on the book is “The honeymoon’s over…”

6) Who is publishing your book?

It’s part of my self-published series, so the short answer is, I am.

7) How long did it take you to write the first draft of the manuscript?

Two months. The amount of time it usually takes me to write this length book.

8) What other books would you compare this story to within your genre? 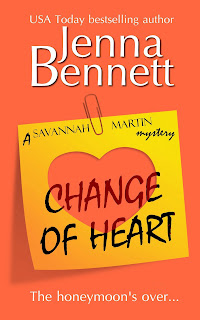 Most people seem to think the Cutthroat Business books remind them of Stephanie Plum. Not surprisingly, since that’s what I was reading when I wrote the first book. There’s more emphasis on the romantic relationship, though. The series is really one long romance novel more than anything else. Unless the mysteries are directly related to the romantic relationship, they’re more in the vein of background.

9) Who or what inspired you to write this book?

My readers! I thought the series was finished after five books, but so many people emailed me asking for more, that I figured I’d give it a try and see if I could get back into it. It’s been nice, visiting with old friends. I just hope I’ve managed to recapture whatever magic the original books had!

10) What else about the book might pique the reader’s interest?

I have no idea. It’s just the next installment of the ongoing saga of Savannah and Rafe, you know?

* * *﻿
Change of Heart is available in digital format from the following e-tailers, starting today:
AMAZON
BARNES AND NOBLE

Kobo, Apple, Sony and a few others are on their way.