Happy Wednesday, y’all – and welcome to the second installment of #WriterWednesday.

This week, we have with us the fabulous Chloe Jacobs, who’s a fairly new friend of mine, and a fellow writer at fabulous Entangled Publishing. We’ve made friends over on Twitter and on our own private Entangled Yahoo loop, and when she found out I was desperately searching for guests for this new #WW venture, she very kindly volunteered.

Let’s put our hands together for Chloe, shall we? Not to mention for Chloe’s fabulous YA novel, Greta and the Goblin King. It will be released in November, just like my book, and like mine, hers is available for preorder at the moment – see links below. It has one of the most gorgeous covers I’ve seen in a long time. Just look at this: 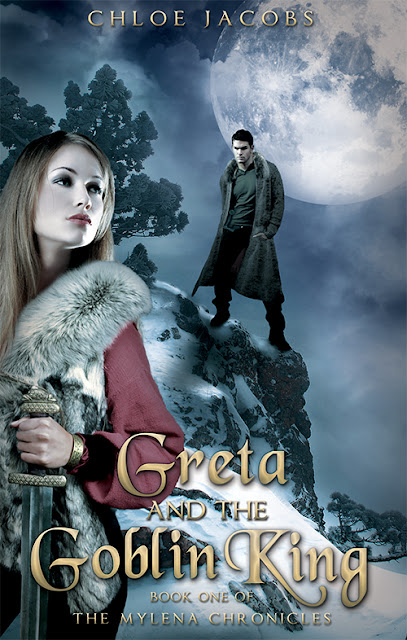 So without further ado, let’s hear it for Chloe:

Hey, how’s everyone this hump day? Or should I say #WriterWednesday? Thanks so much to Jennie for having me as a guest. I’m so excited to be here!

Since it’s Writer Wednesday, I’ll share a little bit about what I’m working on. It’s the second book in my young adult fantasy series, The Mylena Chronicles. Book two starts up a few weeks after the first book finishes off. Greta is still recovering—from what, I can’t tell you…but oh man, it was epic.

Right now, she’s thinking a little bit about the choices people make, and the paths it takes them on.

(By the way…wow, I didn’t realize how very little I could say about this second book without giving away entirely too much from the end of the first book. Sorry about that J )

There’s a moment in every situation when time slows and even the air stops moving. It’s measured in the uneven pounding of heartbeats. In the lightning flash of your life’s every mistake right before your eyes.

This is the moment that comes just before the moment of no return, because ideally you could still stop and go back. Resume the life you were living in the normality of the seconds before and pretend this turning point never existed. But the trouble is, if you speak just one more word, take one step forward, if you let go of it for even a fraction of a second…that’s it. It’s all gone. You fall headlong into the future.

Whether you want to or not. Then there wasn’t any going back.

The inevitability of this had been proven time and time again. Like when she followed her little brother into that damned cave, or agreed to go with Luke after he found her cowering in the snow.

And yeah, those were the big, glaringly obvious ones. But then there were the moments that snuck up on a person. They’re like a dark plague slowly and silently infecting person after person before lying back to wait for the perfect time to unleash hell. She pictured a kid in a crumpled cowboy hat and home-made vest, jumping up from behind the couch shouting “Bang! You’re dead!”

Chloe Jacobs is a native of nowhere and everywhere, having jumped around to practically every Province of Canada before finally settling in Ontario where she has now been living for a respectable number of years. Her husband and son are the two best people in the entire world, but they also make her wish she’d at least gotten a female cat. No such luck. And although the day job keeps her busy, she carves out as much time as possible to write. Bringing new characters to life and finding out what makes them tick and how badly she can make them suffer is one of her greatest pleasures, almost better than chocolate and fuzzy pink bunny slippers.
Follow her on Twitter, Facebook and Goodreads and look for her YA fantasy GRETA AND THE GOBLIN KING in November, 2012!

Available for Pre-Order at Barnes and Noble and Amazon

GRETA AND THE GOBLIN KING
While trying to save her brother four years ago, Greta was thrown into the witch’s fire herself, falling through a portal to a dangerous world where humans are the enemy, and every ogre, goblin, and ghoul has a dark side that comes out with the full moon.
To survive, seventeen-year-old Greta has hidden her humanity and taken the job of bounty hunter—and she’s good at what she does. So good, she’s caught the attention of Mylena’s young Goblin King, the darkly enticing Isaac, who invades her dreams and undermines her determination to escape.

But Greta’s not the only one looking to get out of Mylena. The full moon is mere days away, and an ancient evil knows she’s the key to opening the portal. If Greta fails, she and the lost boys of Mylena will die. If she succeeds, no world will be safe from what follows her back…

16 thoughts on “Welcome to #WriterWednesday… with Chloe Jacobs”