Yes, I’ve been sucked into another one, this time by Lia Ferrell, whose first Mae December mystery I blurbed a year ago.

Her second has just been released – congratulations; I hope the sales are excellent! – and now she has invited me to take part in this blog hop.

Without further ado, here are the questions and my answers:

1) What are you working on now?

While I wait for my little contemporary romance Friends with Benefits to be released on August 1st – currently up for preorder on iTunes; click on the banner above to preorder for the low introductory price of just 99 cents – I’m working on the 9th Cutthroat Business mystery, featuring real estate agent and recovering Southern Belle Savannah Martin in Nashville, Tennessee.

Can you believe I’m already up to nine books? Mindboggling!

In this one, Savannah gets involved in an investigation into the murder of a call girl that cuts a little close to home. The working title is Dirty Deeds, and since I didn’t use that last time, I’m thinking this time it might stick.

2) How does your work differ from other books in its genre?

I’m not sure it has a genre, really. The Savannah books are part sexy mystery, part interracial romance, part women’s fiction, with a little coming-of-age story (at 27)  thrown in for good measure. It defies stereotyping. People sometimes compare them to Janet Evanovich’s Stephanie Plum series, but the setting is Southern rather than New Jersey, and Savannah’s love triangle is very different from Stephanie’s. She knows exactly what she wants; the problem is gathering the courage to grab for it.

I do it for the money.

No, not really. As it turns out, I’m reasonably good at it. I enjoy it. It pays my bills. It’s always nice when you can spend your life doing something you enjoy, and making a living at it. And the stories speak to me. In this case, Savannah’s slow transformation from the perfect Southern Belle she was brought up to be, to a thinking, reasoning human being who questions a lot of what she’s grown up taking as gospel. The Savannah from A Cutthroat Business, the first book in the series, is a very different person from Savannah in this book, and she still has a little more changing to do before it’s all over. But it’s been a fun ride so far.

4) How does your writing process work?

I get an idea and sit down and write. No more and no less. I don’t outline or do much research ahead of time. It’s easy to get sucked into spending a lot of time on research, and you usually end up with a whole lot of information you didn’t really need to know and can’t use in the book. Interesting information, for sure – and sometimes something really great can come from it – but a lot of the time it’s a colossal time suck and nothing more. So I usually wait until I know exactly what I’m looking for, and then I research just that thing and get back to writing. I find I waste less time that way.

I’m a total pantser. Working from an outline is stifling to me. I can do it – and have in the past when I’ve sold books on proposal and had to stick with the proposed story throughout – but I find it messes with my mind. I’d rather just have a basic idea and see where it takes me. I think it was Stephen King who likened writing to walking on the beach. You see the tip of a sea shell, but until you’ve brushed away all the sand, you don’t know what kind of shell it is. It’s kind of like that. A more apt analogy for a crime writer may be that you’re wandering along and you see a bone sticking out of the ground. But until you’ve dug around and unearthed it, you don’t know whether you’re dealing with a dead human, a dead animal, or something that was once a skeleton in a high school biology room.

By the time I finish, I have something that looks and smells a lot like a book. And I have to figure the subconscious knows what it’s doing, because without ever planning it that way, every mystery I’ve ever written has ended up with the case solved and the murderer caught somewhere between 85,000 and 91,000 words. That can’t be either coincidence or luck.

So that’s it for me. Picking it up next week will be my friend and critique partner Jamie Lee Scott. 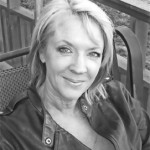 elling author Jamie Lee Scott loves killing people. I mean writing a good mystery. She lives in the Midwest with her husband, two dogs, two cats, and three horses on a small farm. When she’s not writing novels she’s writing screenplays and making indie films, or competing at barrel races.

Her most recent release is (B)ad Vice, book 5 in the Gotcha Detective Agency series. Here’s the dirt:

Now that Mimi Capurro and Charles Parks are co-owners of Gotcha Detective Agency, and Mimi is single again, all should be going well, especially since they just landed a cushy new contract with the local police department. The prostitution decoy sting operation is in full swing and has the stamp of approval from the chief of police. And everything is going great until one of the decoys disappears from the sting operation. Now the Gotcha detectives must find the woman, and find out who would want her to disappear, possibly for good, before the police department vice squad realizes she’s gone.

For more information about Jamie and her books, please visit her website, www.jamieleescott.com