Of all the Victorian house styles, Queen Anne is the most elaborate as well as the most eccentric. The style is often called romantic and feminine, yet it is the product of a most unromantic era – the machine age.

Queen Anne became an architectural fashion in the 1880s and 1890s, when the industrial revolution was building up steam. North America was caught up in the excitement of new technologies. Factory-made, precut architectural parts were shuttled across the country on a rapidly expanding train network. Exuberant builders combined these pieces to create innovative, and sometimes excessive, homes. Country folk yearned for fancy city trappings. Wealthy industrialists pulled out all stops as they built lavish “castles” using Queen Anne ideas.

Although easy to spot, America’s Queen Anne style is difficult to define. Some Queen Anne houses are lavished with gingerbread, but some are made of brick or stone. Many have turrets, but this crowning touch is not necessary. So, what is Queen Anne?

Anne was the Queen of England, Scotland, and Ireland in the early 1700s. Art and science flourished during her reign. One hundred and fifty years later, British architect Richard Norman Shaw and his followers used the term Queen Anne to describe their work. Their buildings didn’t resemble the formal architecture of the Queen Anne period, but the name stuck.
In the US, builders began constructing homes with half-timbering and patterned masonry. These houses may have been inspired by the work of Richard Norman Shaw. Like Shaw’s buildings, they were called Queen Anne. As builders added spindlework and other flourishes, America’s Queen Anne houses grew increasingly elaborate. The Queen Anne style in the United States became entirely different from the Queen Anne style in England, and both styles were nothing like the formal, symmetrical architecture found during the time of Queen Anne’s reign.
Some Queen Anne houses are lavishly decorated. Others are restrained in their embellishments. Yet the flashy “painted ladies” of San Francisco and the refined brownstones of Brooklyn share many of the same features. There is an element of surprise to the typical Queen Anne home. The roof is steeply pitched and irregular. The overall shape of the house is asymmetrical.

A list of Queen Anne features can be deceptive. Queen Anne architecture is not an orderly or easily classified. Bay windows, balconies, stained glass, turrets, porches, brackets, and an abundance of decorative details combine in unexpected ways.
In Avery’s world of Waterfield, Maine, there are a lot of Queen Anne Victorians, since a large part of Waterfield Village, the historic district, was built during the late 1800s. Of all of them, Kate McGillicutty’s Bed and Breakfast, the Waterfield Inn, is probably the most impressive:

The Waterfield Inn turned out to be every bit as lovely – and expensive – as Melissa James had said. It was the most beautiful place I’d ever seen. It was gorgeous, spotlessly clean, and meticulously maintained. A true Queen Anne Victorian, the Inn was a mix of architectural styles and angles. Two-and-a-half stories tall with a square tower, like Aunt Inga’s house, it also had a round tower with an onion dome, like the Kremlin in Moscow. The square tower had a mansard roof topped by a widow’s walk. There was a bay window on the first floor, a wrap-around porch, gingerbread trim, narrow, arched windows, and gables in every direction. The house had every Victorian excess imaginable – the very hallmark of the Queen Anne style – and everything was painted a sunny butter yellow with gleaming white accents. 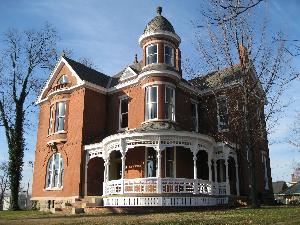 Incidentally, Mrs. Jenkins’s house in A Cutthroat Business and Hot Property is a Queen Anne, as well, although Savannah doesn’t take the time to describe it in as much detail: Circa 1889, it was a three-story Victorian with a ballroom on the third floor and a circular tower on the southeast corner.

I see a lot of Queen Anne’s. They’re all over East Nashville. I’ve always thought Mrs. Jenkins’s house at 101 Potsdam Street looks something like the Ambrose House, shown here, except in much worse shape. When I first moved to Nashville, rather a long time ago now, the Ambrose House was nothing but a shell. Now it’s a gorgeously restored event venue, but in my mind, I still remember it the way it used to be, and used it for A Cutthroat Business.

So there you have it, the Queen Anne Victorian. Hope you enjoyed!