It’s official: the electronic version of A Cutthroat Business is available for sale and download, with a new cover and a new name. 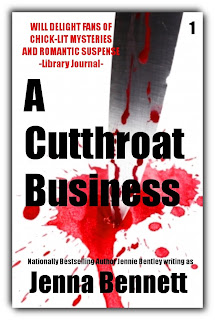 This is the book about which Library Journal said that the “hilarious dialogue and tension between Savannah and Rafe will delight fans of chick-lit mysteries and romantic suspense,” while the Nashville Scene called it a “frothy girl-drink of houses, hunks, and whodunit, narrated in a breezy first person.”

Here’s what would be the back cover blurb, if e-books had back covers:

Everyone has warned new-minted realtor Savannah Martin that real estate is a cutthroat business.

But Savannah doesn’t think she’s supposed to take the warning literally … until an early morning phone call sends her to an empty house on the ‘bad’ side of town, where she finds herself standing over the butchered body of a competitor, face to face with the boy her mother always warned her about.

Rafe Collier is six feet three inches of testosterone and trouble; tall, dark, and dangerous, with a murky past and no future — not the kind of guy a perfect Southern Belle should want to tangle with. In any sense of the word. But wherever Savannah goes, there he is, and making no bones about what he wants from her.

Now Savannah must figure out who killed real estate queen Brenda Puckett, make a success of her new career, and avoid getting killed — or kissed — by Rafe, all before the money in her savings account runs out and she has to go back to selling make-up at the mall.

If I had to describe it, I’d probably call it a sexy romantic mystery in the vein of Janet Evanovich or Gemma Halliday, “with a dose of southern charm and a bad boy you won’t want to forget,” (Tasha Alexander, bestselling author of Dangerous to Know, who also said A Cutthroat Business has “enough wit and sexual chemistry to rival Janet Evanovich”) and that it “hooks you in the first page and doesn’t let go until the last!” (Lynda Coker, Between the Pages)

A Cutthroat Business is listed for $3.99, is roughly 88,000 words, and includes an excerpt from Hot Property, book 2 in the Savannah Martin mystery series, which will be available in digital format in June.

Amazon is dragging their heels, and haven’t gotten the book up for sale yet, but you can find it on Barnes & Noble, for Nook, HERE, and on Smashwords, for Nook, Kindle, iStuff, Sony, Kobo, or PDF format, HERE.