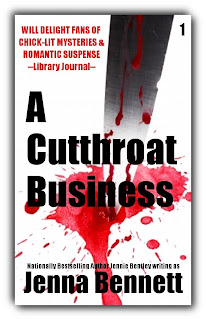 Snippet Saturday is the brainchild of author Lauren Dane, wherein a group of authors selects thematic excerpts from their work and shares them on Saturday mornings. This Saturday the theme is humor.

Since it’s been on my mind lately, why don’t I regale you with the first meeting – recently – between Savannah and Rafe in A Cutthroat Business. I think it’s funny; hopefully you will too:

FROM SOMEWHERE IN CHAPTER 1:

They were as dark as those on a Jersey cow, and surrounded by long, thick, curving eyelashes. There’s nothing wrong with my lashes — nothing a liberal application of make-up can’t correct, at any rate — but I would have sold my soul to possess his.

He could hawk mascara for Maybelline with those lashes. Not that that was the reason I was staring.

“Sorry,” I managed, fighting back a blush. How mortifying, to be caught staring…! “For a second there you looked familiar, but…”

When I didn’t say anything else, he added, “Been back to Sweetwater lately?”

“Guilty as charged.” He made a little mocking half-bow. His voice was pleasant, but his eyes were anything but. They had turned as black as the metal of the motorcycle he’d been riding, and approximately twice as hard. I swallowed and opened my mouth. And put my foot in it.